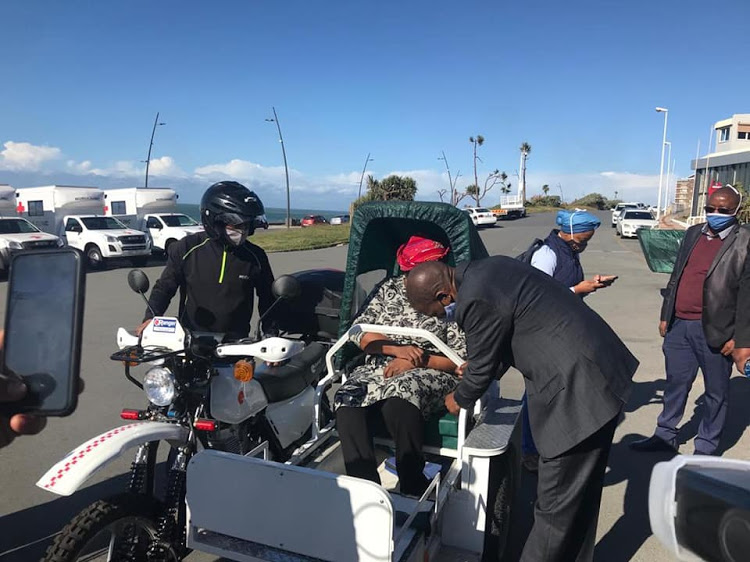 The Eastern Cape health department may not further implement the R10m contract for modified motorbikes to transport patients in rural areas.
Image: Eastern Cape MEC of Health via Facebook

The Special Investigating Unit (SIU) sought the order after allegations that the department purportedly expedited the contract for the procurement of 100 mobile clinic scooters from Fabkomp (Pty) Ltd in light of the Covid-19 pandemic.

The SIU contends the awarding of the contract was done in contravention of the provisions of the Public Finance Management Act and Treasury regulations. It was seeking an interdict to stop any payment for the contract.

Appearing before the tribunal on Friday, advocate for the SIU Monare Makoti said the application for an interdict was unopposed by the department and Fabkomp.

However, on Friday Mbengashe said he, the MEC and Daca were not invited by the tribunal and they were not subpoenaed to appear.

Mbengashe said the department received papers from the SIU indicating it would be asking for an order interdicting the department from proceeding with the procurement of the motorbikes.

“We consulted our legal teams and confirmed to the SIU that we will not be opposing their interdict,” Mbengashe told SABC television news on Friday.

Mbengashe said the department had done what was required in the procurement process and had followed the rules.

He said it would be inappropriate to argue the matter while it was before the tribunal.

Wheels fall off EC scooter project - 'Do not meet basic criteria to be used as ambulances': Zweli Mkhize

The controversial scooters bought by the Eastern Cape health department to transport patients do not meet the criteria for transporting patients as ...
News
10 months ago

Medical motorbikes in Eastern Cape 'not a scam': Zweli Mkhize

Health minister Dr Zweli Mkhize has once again defended the medical motorbikes rolled out in the Eastern Cape last Friday.
News
10 months ago
Next Article