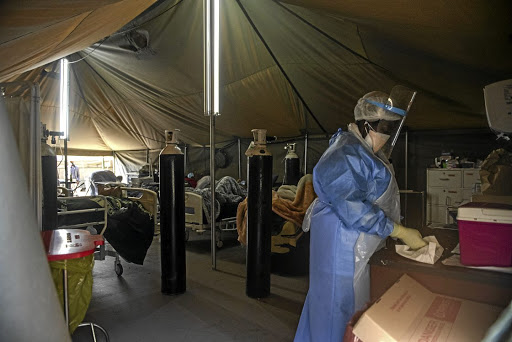 Comfortable but anxious is how Gauteng health MEC Bandile Masuku describes the province's readiness in dealing with the looming Covid-19 infections storm.

Gauteng is the epicentre of the coronavirus in SA and has seen infections shoot up dramatically since the beginning of the month, climbing from 42,881 on July 1 to 93,043 on Saturday.

Masuku is adamant the province would be able to adequately assist those needing medical care and hospitalisation. His confidence is fuelled by the additional number of hospital beds being added, including those in the six field hospitals in Pretoria, Johannesburg and Ekurhuleni.

"[We are] comfortable but anxious. I think we should say that in a very clear way that it's just how we respond every day on what we have on the ground," Masuku said.

He said that even though data from the Gauteng provincial coronavirus command council expects there will be a need for between 54,000 and 70,000 beds by September while the current capacity is expected to be just over 10,000.

According to Masuku, the province's capacity to deal with Covid-19 patients was based on the immediate need and not the long-term prediction.

Twenty-six people succumbed to Covid-19 in Gauteng in the last 24-hour cycle, while 6,011 people were diagnosed with the virus, said the provincial ...
News
1 year ago

"For me the important aspect is that we need to be able to respond on real time on the challenges on the ground."

Masuku said the province was measuring its readiness on both the predictions and what was happening on the ground but said he believed success or failure can only really be measured after.

"It's like writing an exam, it's only after the exam when you can, in a real sense, tell that I was ready or I wasn't ready because the other one might just not be true if you say I'm ready and you find that there was a curve ball and other things.

"So it's just the ability for us to respond to the immediate at that time," he said.

His sentiments were echoed by CEOs of some of the hard-hit hospitals in the province who said the looming infections peak would most definitely present problems.

According to Tembisa Hospital CEO Dr Lekopane Mogaladi, there is no hospital in the country that can confidently say at the top of their voices that they were adequately prepared for the storm.

"No facility in the country, and maybe anywhere in the world, would be best equipped to actually take the numbers that will actually be coming with the surge," he said.

He said Tembisa Hospital has 90 beds in operation and was in the process of finalising an addition of 200 more which were also expected to be full.

"No hospital could ever say 'we are ready', so wha we do is that we actually have to manage the situation as they come and it's very serious and very critical," he said.

The CEO of Steve Biko Academic Hospital Dr Mathabo Mathebula agreed with this.

"We can never say we are confident. We can only do what is in our control and we can never be sure because the rate of infections is coming at a faster pace now."