Cop, soldier and lawyer among 41 arrested for church shooting 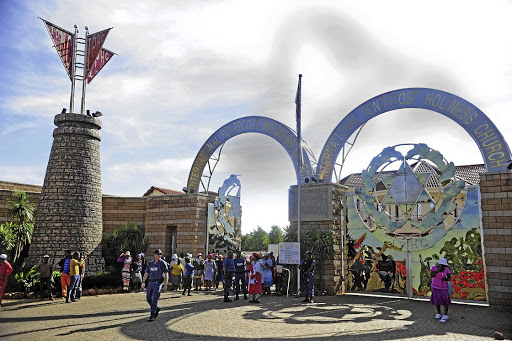 The IPHC headquarters in Zuurbekom, Gauteng, has become a battleground since the death of its leader Glayton Modise in 2016.
Image: Thulani Mbele

A police officer, a member of the defence force and a lawyer are among 41 people arrested for a fatal hostage drama at the International Pentecostal Holiness Church.

Five people were left dead during the hostage and shooting situation at the church in Zuurbekom, west of Johannesburg.

According to National Prosecuting Authority (NPA) spokesperson Phindi Mjonondwane, the group made a brief appearance in the Westonaria magistrate's court on Monday.

“Two of the suspects were injured during the crossfire between the alleged assailants and the church’s security officials. They are currently hospitalised and will appear in court as soon as they are released from hospital,” she said.

All the suspects are charged with murder, attempted murder and malicious damage to property, said Mjonondwana.

The matter was postponed to Wednesday for further investigation.

Mjonondwane explained the bloody scenes that played out in the church.

“In the early hours of Saturday July 11 the South African Police Service (SAPS) responded to an incident of shooting wherein it was alleged that a group of men stormed into the church yard armed with rifles, short guns and pistols and started attacking security personnel as well as residents of the church compound,” she said.

“The police that attended the crime scene managed to rescue those that were held hostage, among them were women and children.”

Police minister Bheki Cele on Sunday met with the leadership of the church, which has been plagued by division since the death of its leader Glayton Modise in 2016.

The division seem to be over who is Modise’s rightful successor, with three people in the running. This ongoing feud has resulted in two breakaway church branches mushrooming.

Cele’s office said when they met with the incumbent church leadership, they were briefed on the “leadership battle currently playing out in the church over recent years”, as well as their request for the intervention of law enforcement.

Cele said he had assured Leonard Modise, the son of the late Glayton Modise, that there would be an improved working relationship between the police and the church. Leonard is also one of those in the running to lead the church.

The minister said the police would explore all angles in their investigation.

“We wish to find a way forward on this matter with all parties involved. The South African Police Service cannot be seen to be taking sides, will not listen to just one side but all sides and enforce the law,” he said.

“The law will have to be on the side of the SAPS in order for us to do our work and prevent further bloodshed.”

This is not the first time that the leadership feud has turned violent. Similar scenes unfolded in 2018, but no fatalities were reported in that attack.

The leadership of the International Pentecostal Holiness Church in Zuurbekom — where congregants were held hostage and five people were murdered — ...
News
2 years ago

At least five people have been killed in what Gauteng police described as a "hostage situation" and shooting at the International Pentecost Holiness ...
News
2 years ago
Next Article