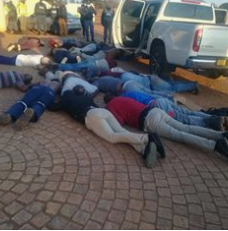 Five fatalities have been reported and 30 suspects arrested in a "hostage situation" at a church in Zuurbekom.
Image: Supplied

At least five people have been killed in what Gauteng police described as a “hostage situation” and shooting at the International Pentecost Holiness Church in Zuurbekom, west of Johannesburg.

Police said they were alerted to the situation in the early hours of Saturday.

“At approximately 3am this morning, various disciplines of the SA Police Service followed by members of the SA National Defence Force responded to reports of a shooting and an alleged hostage situation at the International Pentecostal Holiness Church in Zuurbekom, a town in the West Rand ...

“A group of armed people came to the Modise church and allegedly attacked people who were inside indicating that they were coming to take over the premises,” said national police spokesperson Brig Vishnu Naidoo.

He said police were investigating the possibility that this attack may have been motivated by a feud between conflicted parties in the church.

“Four people were found shot and burnt to death in a car while a fifth victim, a security guard, was also fatally shot in his car while he was apparently attending this complaint.

“Police have arrested over 40 suspects including six people who have been taken to hospital. Among those arrested are members of SAPS, SANDF, JMPD and the department of correctional services,” Naidoo said.

Over 34 firearms including five rifles, 16 short guns and 13 pistols had also been seized.

“The crime scene is still being processed and the figures of arrests and firearms seized may fluctuate as the Special Task Force, Tactical Response Team and Visible Policing members continue to comb the compound. These units have also rescued men women and children who are said to be living in the compound and were being held hostage,” Naidoo added.

National commissioner of police Gen Khehla John Sitole praised the provincial SAPS management and Gauteng team for their prompt response to the attack.

“I am certain that the speedy response by the the joint security forces has averted what could have been a more severe bloodbath”, said Sitole.

“I have tasked the provincial management to finalise its preliminary investigations in the quickest possible time and ensure that the 72-hour Activation Plan is mobilised to bring to book all those responsible for this attack.

“I have embarked on a Spiritual Crime Prevention Concept which involves the participation of all religious denominations in the fight against crime. It is rather unfortunate that such an incident takes place during a time when SA is being plagued by a deadly virus and violent crimes,” Sitole added.

Death of Vela Shembe has thrown the church into a new era of bickering, accusations and counter-accusations.
News
4 years ago