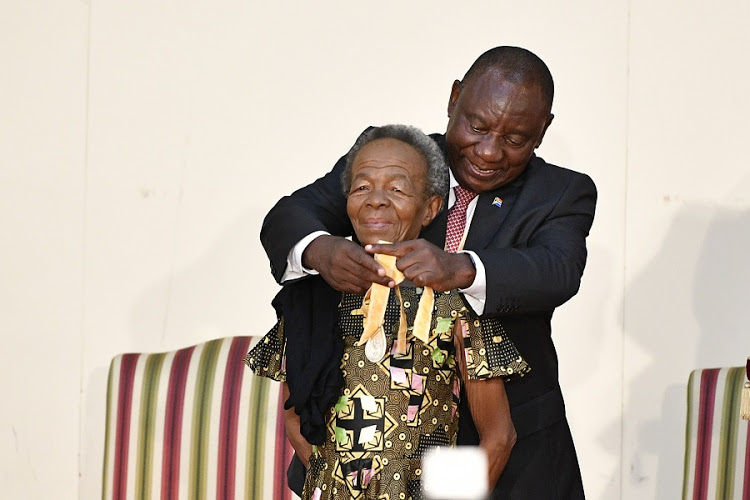 Tributes for the late legendary actress Mary Twala have poured in since the announcement of her death on Saturday morning.

Her son choreographer Somizi Mhlongo posted a message on his Instagram account and thanked the country for loving her.

Today's my late father's birthday.....and my mom decided to respond to his call to join him in heaven.....THE TREE HAS FALLEN...I'm shattered to the core.....but I'd be very selfish if I dont release her....my mom lived to the fullest....achieved beyond her dreams....its hurts like hell.....I wont lie.....a day without her calling to either say I love u or give me money.......thank u south africa for loving the phenomenal super star that is my mother.......she left us peacefully around 11am at parklane pvt hospital as I was on my way to drop off her gown and a few minutes earlier the dr called to say come shes up and jolly now.....I arrived a few mon late......LALA MA......

Industry peers have praised Twala for her hard work and passion for her craft.

Legendary stage and TV actor Mabutho “kid” Sithole described the late seasoned Twala as one of the greatest thespians in the country.

Sithole met Twala and her late husband Ndaba Mhlongo at the famous Gibson Kente Institution in Dube. He told SowetanLIVE that before he could join the institution, he saw Twala performing in one of Kente’s production called Ilifa.

“I still remember her in that show; she portrayed the role of a woman who had lost her mind. She was so good in that character that even after the show had ended we thought she was not okay upstairs for real."

Sithole added: “Mary was a talented artist who enhanced her work with passion, devotion and hard work. She was the kind of an actor that when we are rehearsing if she was not happy she would stay behind and fine-tune her character until she is happy. She was also funny too,”

Former radio broadcaster and seasoned playwright Paul Rapetsoa said he met Twala in 1979 at the institution owned by the late Gibson Kente said Twala was a natural born actress.

“I acted along Mary Twala, Darlington Michaels and Mbongeni Ngema in the show called Mama and The Load which was written by Gibson. When I left in 1980, they joined me in my show Circumstances and we toured the whole country. When I was looking for a seven year old boy, they suggested Somizi and he was good.

“What I can tell you is that Twala was one of the best singers in the country. She was a theatrical singer, dynamic and a good teacher.”

We have lost a unique talent and an endearing human being whose performances brought to life the meaning of being South African, and appealed to South Africans of all generations. We will miss her dearly. #RIPMaryTwala pic.twitter.com/uhuMe0yUWk