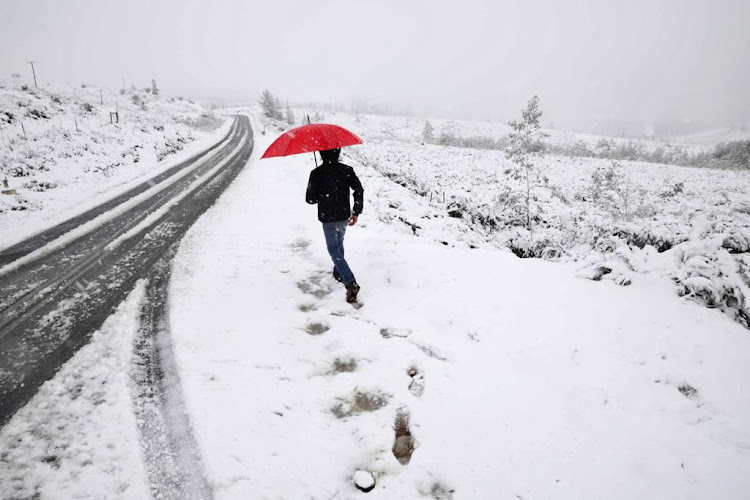 The SA Weather Service on Wednesday warned that freezing temperatures in many parts of the country would continue all week.

Another cold front was on the cards but would mainly affect the coastal areas in KwaZulu-Natal, Western Cape and move towards the Eastern Cape at the weekend.

“The weather we are experiencing, especially in the eastern parts, is expected to continue for the rest of today and tomorrow, so that means we can expect rain and showers over the North West, Gauteng, Mpumalanga, KwaZulu-Natal, the Free State and southern parts of Limpopo,” said forecaster Edward Engelbrecht.

He said the conditions had resulted in snowfall over the northern Drakensberg and high-lying areas of Mpumalanga.

Temperatures in many parts of the country were expected to remain in the low 10s, while a slight improvement into the mid-10s was expected to kick in on Thursday.

The service could not comment on reports that Tuesday had been the coldest day in more than four years.

“Unfortunately, we can’t comment on the coldest day at the moment, because we are still waiting for our climate division to give us complete data on that. We will send out something immediately, as soon it’s confirmed,” said Engelbrecht.

❄️OFFICIAL: Our records show TUESDAY OFFICIALLY THE COLDEST DAY IN OVER 4 YEARS in Gauteng and JOINT SECOND COLDEST OF PAST 9 YEARS!!!

While the weather system was expected to leave the country on Friday, with temperatures set to improve, some areas remained at risk.

“We also have a watch out for heavy rainfall over the north coast of KZN and that may lead to localised flooding today and tomorrow morning,” said Engelbrecht.

High-lying areas of KwaZulu-Natal and Mpumalanga faced the possibility of freezing rain, which would result in dangerous driving conditions.

Drivers were urged to exercise caution. “For the north coast of KwaZulu-Natal, there may be localised flooding, so drivers and pedestrians should exercise extra caution when crossing low-lying bridges,” he said.

As per our forecast some freezing rain in Coligny in the North West sent in by Antionette Du Preez pic.twitter.com/uePtkxbQ0z

Cold weather remains over Gauteng and central SA until Friday, weekend set to be fairer

A worsening of the already cold weather conditions is forecast for Gauteng, Free State, North West, Mpumalanga and parts of KwaZulu-Natal from ...
News
1 year ago

IN PICS | Rare winter wonderland in Ceres as snow falls

Freezing temperatures in Ceres, Western Cape, meant the town's residents could enjoy a day of playing in the snow, a rare occurrence for many parts ...
News
1 year ago
Next Article