Mini substation in Alexandra blows up, leading to electricity outage 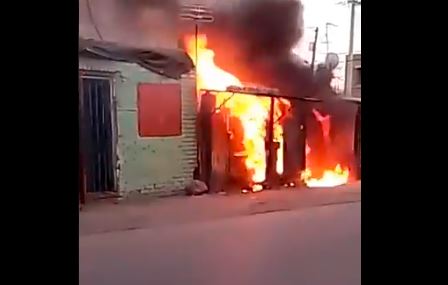 A mini sub-station blew up in Alex, causing a power outage.
Image: Screenshot

A mini-substation blew up and caught fire in Alexandra on Tuesday due to overloading caused by illegal connections, City Power announced.

Isaac Mangena, City Power spokesperson, said it would take more than 24 hours to restore power in the area.

“It started early in the morning. Alexandra is one of the hotspots for illegal connections. We had to deal with that issue, but we are not able to restore power yet, it might take more than 24 hours. We appeal to the residents to calm down.

“This is the fourth substation that has burst due to overload since June. We have other areas we are looking at: Rabie Ridge, Lenasia and Roodepoort that have a mushrooming of informal settlements. It doesn’t only inconvenience paying customers but also businesses in the area,” Mangena said.

The Alexandra one blew up at 16th Ave Joe Nhlanhla leaving many in darkness and cold.

City Power urged members of the community to play their part and reduce over-usage of electricity.

“As you are aware most of our equipment failed due to the overloading on the network brought about by illegal connections and irresponsible use of electricity.

“Our mini-substations, pole-mounted transformers, and cables exploded and burnt because of this overloading. Replacing a transformer that blew up always takes over 24 hours, depending on availability.

“Since the beginning of winter we have been experiencing a high increase in outages across the city of Johannesburg,” he said.

The outages are caused by the following known problems: