The streets of Hillbrow in Johannesburg on the second day of the nationwide lockdown.
Image: Alaister Russell / Sunday Times

South Africa has the highest number of confirmed Covid-19 cases and deaths in the Southern African Development Community (SADC) region.

Health minister Dr Zweli Mkhize gave an update on the virus during a virtual briefing to the parliamentary joint committees on health early on Monday.

The presentation revealed that the continent continued to register a “steady” increase in Covid-19 cases across 45 countries and territories.

SA had the highest number of cases (in the African region) followed by Egypt and Algeria. However, Algeria and Egypt had a higher number of deaths.

SADC region, according to the presentation, had reported a total of 5,714 confirmed cases and 140 fatalities - an increase of 347 cases over 24 hours. 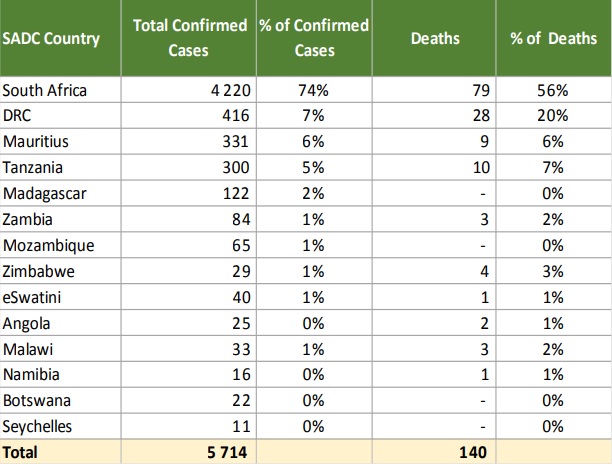 The SADC region has reported 5,714 confirmed cases and 140 fatalities, an increase of 347 cases over 24 hours.
Image: National department of health

Overall, the African region had 19,497 confirmed cases and 812 fatalities.

Mkhize said during the briefing, broadcast by eNCA, that in South Africa, “we are seeing changes in the outbreak on a day-to-day basis.

“When we started, Gauteng province was the one that had the highest. Things have shifted now with the Western Cape being the epicentre.

“The problem which we are seeing is that there is a change in pattern there ... We have cluster outbreaks which are happening in workplaces which were originally identified as essential services.

“It looks like we have to find additional support to strengthen the response ... in that area,” he said.

He said the Eastern Cape was also an area of concern and had overtaken the Free State, which saw many people infected after attending a church gathering.

In the Eastern Cape, “the outbreak is driven by social gatherings, mainly funerals”.