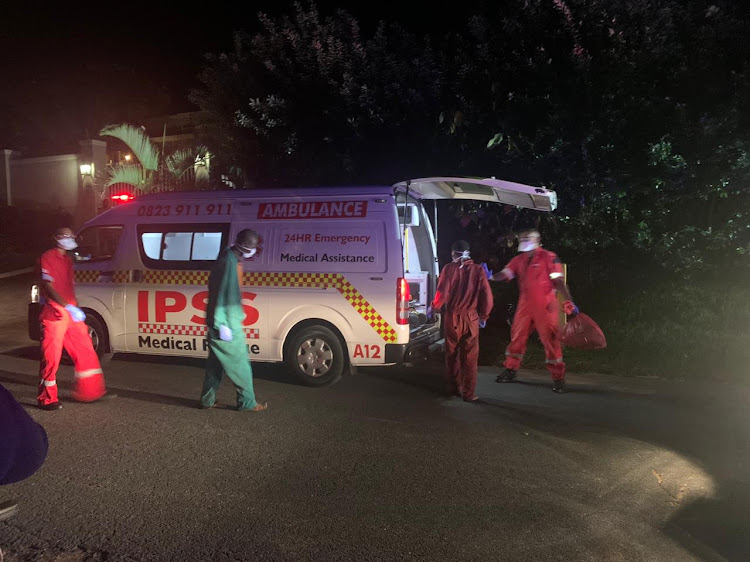 Tanzanian stowaways, in green and red between IPSS medical staff, make their way to the ambulance after being rescued offshore of Zinkwazi beach, KZN.
Image: IPSS Medical Rescue

The SA Maritime Safety Authority (Samsa) is working with police in their investigation into an incident in which two stowaways were apparently thrown off a ship just off the KwaZulu-Natal Coast last month.

In a statement on Sunday, Samsa said the investigation followed allegations by two Tanzanian nationals that they were thrown overboard from the MV Top Grace, a Panamanian-flagged bulk carrier, after illegally boarding the vessel while it was berthed at Durban harbour.

“It is alleged that the two stowaways had boarded the vessel which was berthed at Maydon Wharf in Durban on Monday March 23 2020 by climbing up the mooring ropes and hiding in the chain locker.”

When they were discovered hiding on the ship, after it had set sail, they alleged that they were thrown overboard with a makeshift raft, life jackets and some bottles of water.

“The Tanzanians claimed they spent two days at sea before washing out at Zinkwazi beach on the North Coast of KwaZulu-Natal.”

The vessel is now berthed at the Richards Bay harbour and is detained.

“Seven crew including the ship's master, chief officer, third officer, chief engineer, first engineer, second engineer and bosun were taken into police custody and charged with attempted murder before being released on bail. The crew were allowed to return to the vessel until their next court appearance.”

Samsa said it had also conducted its own investigation and has shared the information with the police to assist with their ongoing investigation.

“Samsa would like to warn vessels sailing through its territorial waters that any vessels found to have transgressed SA’s national laws, will be held accountable to the fullest extent of the law,” the statement read.

The luxury cruise liner Queen Mary 2 had to sail back towards Durban on Thursday night after a British passenger fell ill and had to be airlifted ...
News
2 years ago
Next Article