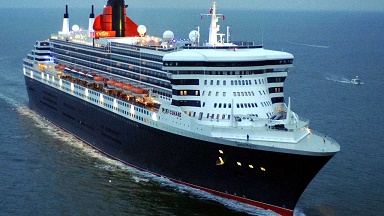 The Queen Mary 2 had set sail for the UK from Durban on Thursday when it had to be rerouted off the Durban coast after a passenger fell ill.
Image: Supplied

The luxury cruise liner Queen Mary 2 sailed back towards Durban on Thursday night after a British passenger fell ill and had to be airlifted from the ship.

The ship had left the port of Durban at 7am on Thursday after six South African crew members disembarked after testing negative for Covid-19.

It had set sail for Southampton in the United Kingdom with the remaining 1,209 crew and 264 passengers.

National Sea Rescue Institute (NSRI) spokesperson Craig Lambinon said teams in Port Elizabeth, East London and Durban were placed on high alert on Thursday evening after receiving a report from the Maritime Rescue Coordination Centre (MRCC) that a 58-year-old British man had to be evacuated after a “medical emergency” which was not related to Covid-19.

“A Western Cape government EMS duty doctor had spoken to the ship's medical team, and it was deemed necessary for a patient evacuation to a hospital as soon as possible.

“At that stage the ship was approximately 20 nautical miles offshore of Morgans Bay, on the Transkei coastline. After investigating options MRCC rerouted the ship to head in a direction towards Durban.

The rescue team departed from Durban at 7pm.

The team arrived at the ship at about 9:30pm and in challenging conditions, including 25 knot winds and two metre swells, an NSRI rescue swimmer and two paramedics were hoisted onto the ship.

“They received the patient from the ship's medical crew. The patient was secured into a basket stretcher and hoisted into the helicopter.”

Lambinon said the man was in a stable condition when he was taken to a hospital in Durban.