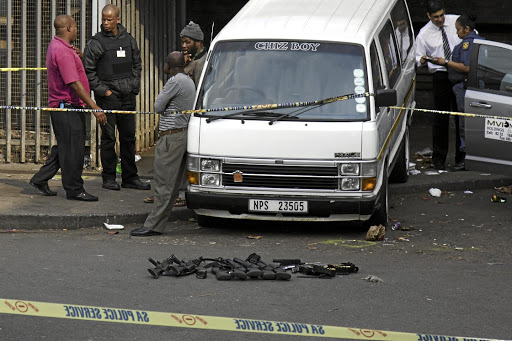 Shooting incidents such as this one in Durban's Brook Street taxi rank are claiming dozens of lives of taxi operators across SA. In Gauteng, two owners were killed at the weekend, despite the ongoing commission. / Rogan Ward

Taxi associations are worried about the rate at which their members are being killed in hits despite government intervening in the taxi wars.

This comes after the murders of two taxi owners in separate incidents in Gauteng at the weekend.

Mziwakhe Mbatha, a taxi owner from Greater Germiston Taxi Association, was gunned down in Lambton, Germiston while he was travelling with his two security guards, Sipho Masondo and Sifiso Mthembu.

The three were shot when they approached the traffic light at the intersection of Webber and Beacon roads in the Ekurhuleni suburb. Four occupants in a gold Qashqai vehicle opened fire on them with an AK47.

According to a source, Mbatha had been at a meeting in Germiston and was returning to the meeting after buying food. "The security officers had been hired by him and he was not driving his own vehicle.

"He was driving a vehicle which had allegedly been lent to him by another taxi owner," said the source. Mbatha's family refused to comment on his death and said they were still coming to terms with the murder.

Taxi hitman's reign of terror brought to an end

The murder spree that was dubbed Cape Town's taxi war just got a face and a name after taxi hitman Phindile Velem was sentenced to two life sentences ...
News
1 year ago

Taxi violence in Gauteng has gotten so bad that owners are abandoning their positions in associations in fear of their lives.
News
1 year ago

In Soweto, Derick Mlungisi Kunene from Nancefield Dube West Taxi Association was shot and killed on Thursday along the Chris Hani Road in Dlamini.

Police spokesperson Capt Kay Makhubele said they were investigating both incidents and that no arrests had been made.

According to Dumisani Mpungose, Kunene's death had cast a dark cloud over their association.

"We do not know why he was killed... It hurts, but Mr Mbatha was also affiliated to other associations so we would not know the reasons behind his murder," Mpungose said.

He described Kunene as a loyal and hard working taxi owner who wanted things to happen by the book.

"He will be missed because he was a straight talker and did things properly, an active member of the association," Mpungose. Transport MEC Jacob Mamabolo said he was disappointed with the recent wave of taxi deaths.

Mamabolo said the recent attacks could have been sparked by evidence at the commission of inquiry into taxi violence in Gauteng that's currently ongoing.