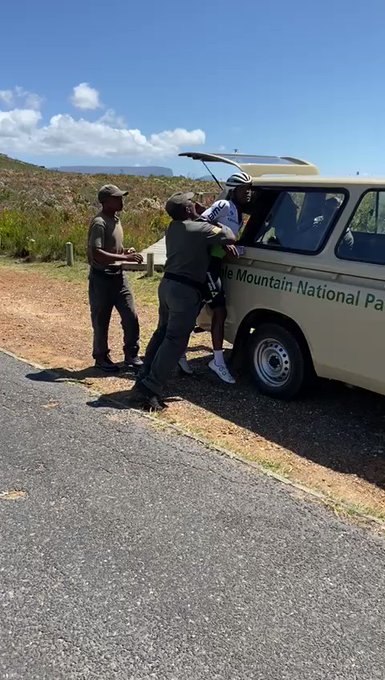 A screenshot where Nic Dlamini was allegedly assaulted by rangers at the Table Mountain National Park.
Image: Twitter/Lawrence Lindeque

Five Table Mountain National Park rangers involved in the incident that left top cyclist Nic Dlamini with a broken arm have been placed on precautionary suspension.

SA National Parks acting CEO Lize McCourt said on Saturday an independent service provider would be appointed “to conduct a preliminary investigation following an unfortunate incident where a cyclist suffered a broken arm during an arrest by SANParks rangers on Friday”.

McCourt said park managers met the five rangers on Saturday morning and “placed them on precautionary suspension pending the finalisation of the investigation”.

She expressed regret about what had happened and said SANParks"will afford Mr Dlamini and his family all the necessary support at this stage”.

He added: “Upon investigating and finding the cyclist who could not produce his entry ticket or a valid activity permit‚ the situation spiralled causing the suspect to injure himself during the ordeal.”

Some news on @nich_dlamini -he is out of surgery but super, super tired 💤💤💤 but also totally humbled by all the massive support and love out there. 🙏🏾🙏🏾 pic.twitter.com/FGcOLYpjTY

Jean Smyth‚ the spokesperson for Dlamini's team‚ NTT Pro Cycling‚ said an update on Dlamini's condition would be issued once Mulder and the team doctor had been consulted.

Dlamini’s fellow South Africa rider Daryl Impey tweeted: “Nic didnt deserve this. What a shame @SANParks. You should be very ashamed of yourselves.”

Dlamini rode his first Grand Tour last year‚ finishing 107th at the Vuelta a Espana‚ and had hopes of qualifying for July’s Olympic road race in Tokyo.