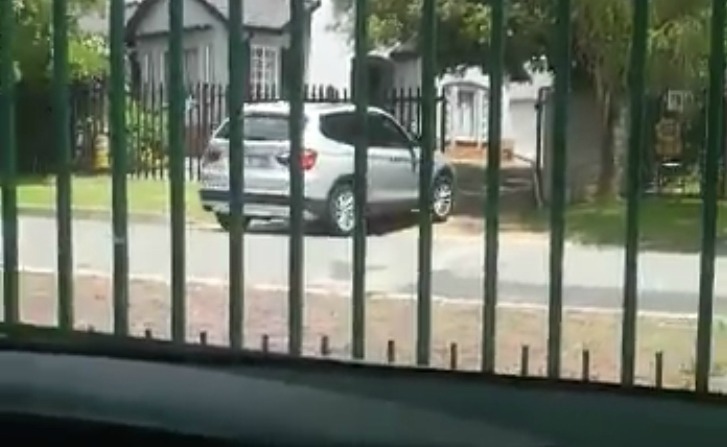 A screengrab from a video taken on Sunday afternoon showing a gang robbing a house in Eden Glen, Johannesburg. The man who filmed the video was shot once after the gang seemingly spotted him taking the video.
Image: Supplied

A 70-year-old man was shot seemingly after a gang of robbers caught him filming a home invasion on Sunday afternoon.

Video footage of the shooting, which has been posted on various social media sites, shows the gang in a white BMW SUV pulling up to a gate at a property in Eden Glen, Johannesburg, at around 1.30pm.

The video is being filmed from inside a vehicle from across the road.

Shortly after the vehicle pulls out of the drive, one of the robbers apparently spots the man filming the incident and confronts him. In the scuffle, a single shot can be heard ringing out.

Netcare 911 spokesperson Shawn Herbst said that paramedics were called out after a 70-year-old man "sustained a gunshot wound to his upper torso". He was in a critical condition.

"Due to the nature of his injuries a Netcare 911 helicopter air ambulance was activated to airlift the patient to a specialist facility. Circumstances leading up to the shooting will be investigated by the relevant authorities," said Herbst.

Attempts to get comment from police on Sunday evening were unsuccessful.