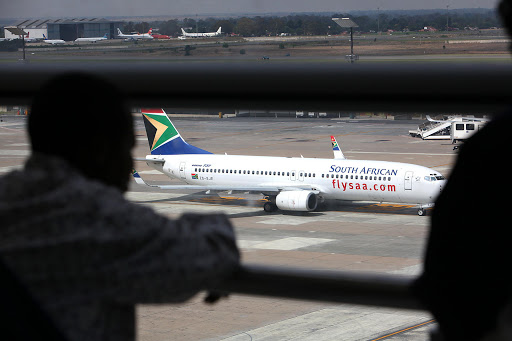 For far too long the government has been 'subsidising the middle class and wealthy' to fly around, instead of ordinary workers who 'got stuck in old trains and were late for work', says finance minister Tito Mboweni.
Image: Gallo Images / The Times / Alon Skuy

Finance minister Tito Mboweni says the government will not bail out the national carrier SAA "forever", telling MPs that only a private equity partner can rescue the cash-strapped airline.

Mboweni spoke frankly about the financial health of the national carrier during his medium-term budget policy statement [mini-budget] in parliament on Wednesday, saying that for far too long the government had opted to "subsidise the middle class and wealthy" to fly around, instead of the ordinary workers who "got stuck in old trains and were late for work".

At a media briefing before addressing the National Assembly, Mboweni said the government was planning of sell off or close down some of the worst performing state-owned companies.

"Dondo [Mogajane, the DG of the National Treasury] and myself, we have an agreement that we're going to sell some assets - but we're not going to tell you which ones," said Mboweni.

"When you're in difficult times, if the glove doesn't fit, you don't wear it. When the family is in trouble, you rebalance your portfolio. All of us do that and the country must do that as well.

"DG Dondo and myself are looking very carefully what we can discuss with the department of public enterprises about which of these many state-owned [entities] should be in public hands and which ones should not be."

Mboweni said the national carrier was unlikely to generate sufficient cash flow to sustain its operations in its current form, adding that an equity partner was needed to save SAA from financial ruin.

According to the min-budget documents, SAA has incurred R28bn in accumulative losses in 13 years.

It was given a government cash injection of R5.5bn this year to help it meet its debt obligations.

SAA was also unlikely to be able to finance its outstanding government-guaranteed debt of R9.2bn for this financial year without state support.

"It is unlikely ever to generate sufficient cash flow to sustain operations in its current configuration, which then begs the question: how long are we going to be on this flight path? Forever? I think not. Operational and governance interventions are required urgently," said Mboweni.

"I am pleased to learn that there are conversations involving SAA and potential equity partners, which would liberate the fiscus from this SAA sword of Damocles."

Mboweni also said the government could no longer afford "throwing money at Eskom". The power utility was given an allocation of R26bn for this financial year, while it was due to receive another R33bn in the 2020/2021 financial year and a further R10bn in 2021/2022.

"We cannot continue to throw money at Eskom. For the sizeable support required, it cannot be business as usual. Eskom must do the following: run their current plant and equipment better; achieve other operational efficiencies, including much better cash management; and fast-track the separation of the utility into three parts, as endorsed by the political principals. There should be no doubt about the policy decisions in this regard."

Mboweni said managers of SOEs relying on state support should no longer receive bonuses or pay hikes "when they fail to meet basic financial targets and service objectives".

"In fact, they should take a pay cut and in some cases be relieved of their duties. And finally, businesses with outdated business models are a major fiscal risk and should be closed."