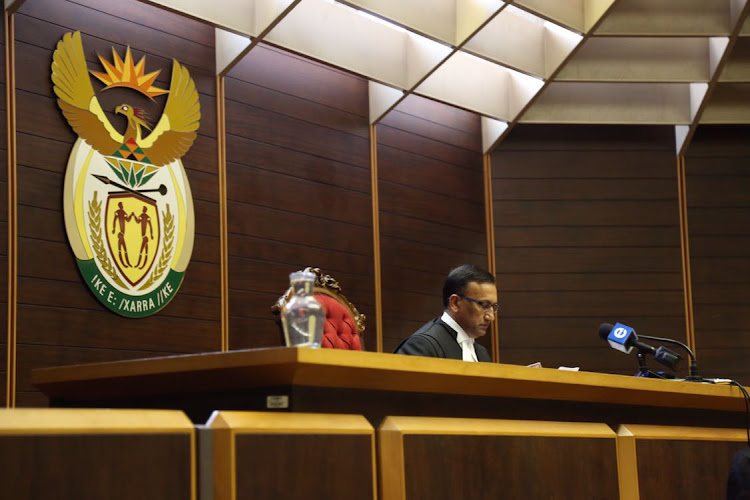 Judge Rishi Seegobin in the Pietermaritzburg High Court. The report showed that the bulk of the work was done by SA's high courts.
Image: Jackie Clausen

Chief justice Mogoeng Mogoeng says a conviction cannot be used as a yardstick to measure the performance of prosecutors.

“The NPA’s reliance, or the requirement for prosecutors to rely on the conviction rate as a performance yardstick, must be corrected. They don't convict. Judicial officers do,” he said, while presenting the annual report on the state of the judiciary in the constitutional court on Thursday.

Mogoeng said the responsibility of prosecutors was to present cases and support an acquittal where the interests of justice would be served by doing so, “not to pursue a conviction at all costs”.

Giving a breakdown of the performance of courts in the country during the 2018-2019 period, Mogoeng said superior courts reached a 70% performance level.

SA's prisons could run out of beds as crime rate surges

The growing crime rate and rise in life sentences meted out to offenders may mean that there won't be enough beds for criminals in SA’s prisons.
News
2 years ago

The constitutional court finalised 76% of cases, against a target of 80%.

The competition appeal court finalised 57% of cases, against a target of 90%.

The supreme court of appeal finalised 214 appeals of 232.

“The challenges experienced by the judiciary have been exacerbated by an ever-increasing workload,” he said, adding that the report showed that the bulk of the work was done by the high court.

The labour and labour appeal courts had finalised 3,756 of the 5,915 matters they received.

“The land claims court ... has dedicated itself to bringing justice to the people ... It has finalised 219 of the 354 cases brought before it during the reporting period.”

The electoral court lived up to its mandate and “track record” of finalising cases “as speedily as it is almost always required to”.

“These training courses contribute toward the efficient and effective administration of justice.

“The stress on judicial officers, which is a result of some of the traumatising cases, like rape, murder and difficult divorce matters, that we have to handle, and attacks of all kinds by aggrieved litigants, requires the introduction of a judicial wellness or stress-management programme.

“It can't be left to an individual judicial officer to fend for herself or himself.”

Mogoeng also said that more needed to be done to ensure gender representation in the composition of the judiciary.