I'm scared for the safety of my daughters, other kids and women 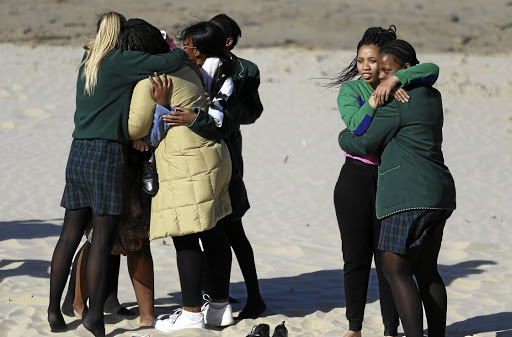 Friends of Uyinene Mrwetyana pray for her safe return at Nahoon beach in Cape Town, before her murder was confirmed by authorities earlier this week. /MICHAEL PINYANA

I am an avid listener of Eusebius McKaiser's talk show on 702. On Monday, after returning from holiday, he narrated how his experience of safety in Barcelona, Spain, is far different to what he is used to in our country.

In Barcelona, he was able to take late night and early morning walks. The South African in him always looked over his shoulder, checking his surroundings because it is not always safe to walk carefree in our country.

A listener, a South African woman who had also been to Barcelona, called in to share her experience, saying she went to places she would have otherwise felt very unsafe in in South Africa.

The lady spoke about walking alone at 2am; at first uneasy, but soon realised it was the norm in Barcelona.

She narrated how she sometimes travels, solely to enjoy the freedom and safety that she has in other countries as a woman. A freedom many women hardly get to enjoy in our country.

On Monday night as students on various campus held night vigils for University of Cape Town student Uyinene Mrwetyana, who was murdered by a man, the ...
Opinion
2 years ago

This is not an ignorance to the fact that other countries are also unsafe, but I am certain that our country is one of the most unsafe places in the world, especially for women.

In fact, SA has recently been ranked first in the world's 10 worst countries for women to travel alone. This is according to the 2019 Women's Danger Index.

Spain is ranked the safest country for women to travel alone. It is no wonder that the lady caller raved about Barcelona's safety on McKaiser's show.

This conversation happened at the time my own thoughts were deep on the safety of women in this country, and being haunted by the disappearance of Uyinene Mrwetyana.

The vanishing of the UCT student hit me because I have a daughter in varsity. I have very little control over her safety because other than having access to her via her cellphone, I cannot keep track of her 24/7.

She is 24, deserves a level of privacy, independence and some level of freedom of movement without her ad obsessing over her. It is almost unrealistic to expect that as a parent we will know every move our children make, especially because our children move out of the home as they grow and frankly - we have our own demanding lives. On Monday afternoon, condolences poured out for Uyinene.

As I write this piece, the details around her death are sketchy, save to say she was allegedly raped and killed by a 42-year-old post office worker. The attack happened inside a branch of that public institution.

As a father, grandfather, uncle, partner and brother, I am disheartened, scared and terrified for my daughters, my sisters, my partner and my grandkids.

What is even scarier for me, is that there is nowhere any woman or child is safe in SA. A trip to the post office can turn into a rape and murder scene. This goes to show that there is nothing women and children can do to avoid danger in our country.

It is easy to suggest that women should stay indoors, in the comfort of their own homes.

But how do we make this suggestion when women are raped, murdered and harassed by their own fathers, intimate partners, uncles and brothers. Six-year-old Amy-Lee de Jager was snatched from her mom's arms outside her school. What then do we say it's safe for women and children.

Women are forced to think carefully about going for a simple jog or where to gym or what to wear - in order to avoid danger. This is the burden our society has put on being a women or child.

I wish I had a solution to offer at the end of this article, with ideas what our next move as a country should be, to save the bodies of women and children from this war. All I can say is that I am scared for my daughters, other children and women out there.

And then later in the week someone tweeted their disgust that a man had asked for petrol for having picked a lady up.
Opinion
2 years ago

Khanya Mrwetyana, the older sister of murdered UCT student Uyinene, has paid homage to her in a touching and emotional Facebook post on Monday ...
News
2 years ago
Next Article