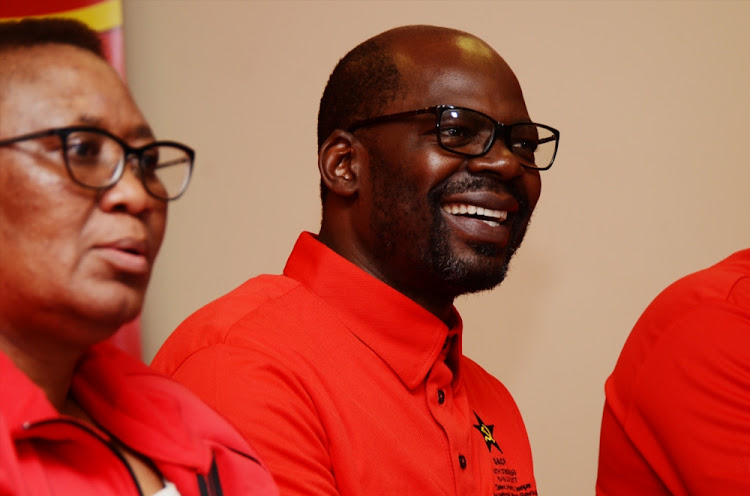 EFF leader Julius Malema was let off the hook by "corrupt" elements in the National Prosecuting Authority (NPA).

This is according to South African Communist Party (SACP) deputy general-secretary Solly Mapaila. He said Malema was let off in the case involving his Ratanang Trust, which was a shareholder of On-Point Engineering, a company fingered for improperly benefiting in a multimillion-rand tender in Limpopo.

According to Mapaila, this was among the reasons the EFF and its leader had made minister of public enterprises Pravin Gordhan their personal project, because he was the one who cracked down on Ratanang Trust issues during his tenure as minister of finance.

Mapaila said it was unfortunate that the NPA had not yet made headway in the case, which was struck off the roll after one of Malema's co-accused fell ill in 2015.

It was a decision Mapaila blamed on what he said was an NPA that was corrupted during former president Jacob Zuma's tenure as head of state.

"Why this chase of Pravin Gordhan? Because he was in the ministry of finance and was blocking certain things," said Mapaila.

Floyd Shivambu on Wednesday echoed Julius Malema in saying that the SACP's Solly Mapaila was also in on the plan to oust Zuma.
News
2 years ago

"The interest of the EFF in comrade Pravin is that it was under PG's leadership that Ratanang Trust, solely owned by Malema, was investigated by the South African Revenue Service (SARS) and by public protector Thuli  Madonsela, and was found to have been involved in malfeasance and fraud. There was one beneficiary of that trust: Julius Sello Malema.

"That is the point the media should be pursuing as to what finally happened with that issue. At some point there was supposed to be a criminal case but the people at the NPA, the majority of them were corrupted, so this case did not go anywhere."

However, the EFF leader has previously said he had nothing to hide and dared the NPA to make a move.

During an EFF press conference in Cape Town last month, responding to the SACP and Ahmed Kathrada Foundation's announcement of the "defend democracy" movement, Malema said he would not be silenced by mentions of the NPA.

"We have no issues with the NPA because the NPA has the power to charge whoever they want to charge. If they (NPA) want to charge, let them charge but we will never be silenced," said Malema.

Mapaila said Malema's attack on Gordhan was also motivated by the fact that SARS was closing in on the firebrand leader of the red berets' friend, businessman Adriano Mazotti.

"Mazotti is a friend of Malema and a man who made a donation for the EFF to register with the IEC for elections in 2014. Now this man (Mazotti) has been in conflict with SARS regarding illicit trade of tobacco," said Mapaila. "So there is one thing there that can be linked up because the dominant person in fighting this has been Pravin Gordhan."

Malema has on multiple occasions denied this, including during the EFF media conference four weeks ago.

The SACP on Wednesday came to the defence of its first deputy secretary Solly Mapaila, saying he acted on the party's instruction to lobby "South ...
News
2 years ago

"If Mazotti has got problems of tax and if Mazotti is engaged in illicit cigarettes, they must arrest him," said Malema. "We have nothing to do with Mazotti's business. They keep on saying Mazotti this, Mazotti that. They have the power and  authority to arrest him  so we are not going to be deterred by Mazotti criticism."

Of late, Mapaila and Malema have been at each other's throats over Gordhan.

Mapaila has also blamed Malema's attacks on him for fuelling a "wrong narrative in the public" that he was in the pocket of businessman Johann Rupert.

Mapaila said: "The bottom line is that it is untrue that I am controlled by Rupert because I have never met this Rupert guy.

"The truth is I serve in the Mapungubwe Institute for Strategic Reflection, a think tank, and there was no Rupert when we established the NGO."