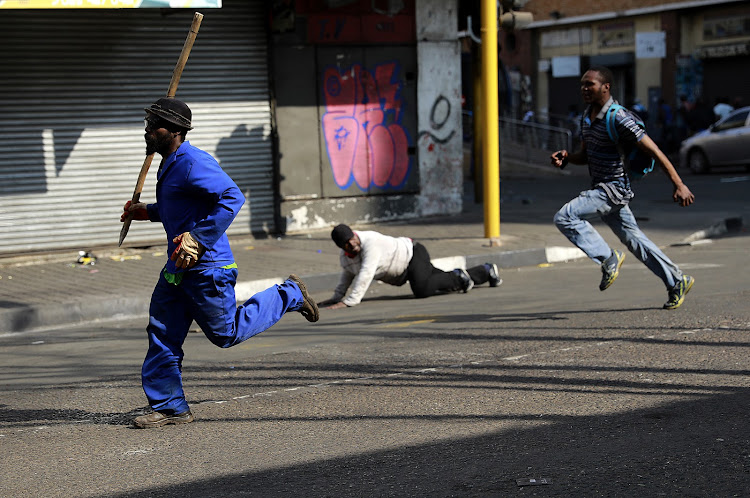 Almost a week after the Joburg CBD erupted into chaos, the police stepped up the pressure and continued with raids, confiscating goods from alleged illegal traders on August 7 2019.
Image: ALON SKUY

People occupying buildings that were raided in the Johannesburg inner city on Wednesday were seen disposing of goods before the police conducted their operation.

In a video posted on Twitter, people could be seen throwing goods stacked in bags from the fourth floor of a building in the CBD before the raids.

More than 500 undocumented foreign nationals were arrested, six rifles recovered and “large consignments” of counterfeit goods were seized during raids in the Johannesburg inner city on Wednesday.

Police said the legal status of each of the foreign nationals would  be determined by the department of home affairs, while the local criminal record centre will check if they have criminal records.

“Unlicensed firearms - six rifles, six pistols, four shotguns and hundreds of rounds of ammunition of varying calibres were found in one room on the 12th floor of Medical One shopping centre in Rahima Moosa Street.

HOW THE PEOPLE OF JOBURG GOT RID OF EVIDENCE BEFORE BEING RAIDED BY POLICE... pic.twitter.com/kMe8zNXbof

“A suspect was arrested for possession of unlicensed firearms and ammunition. The firearms will be subjected to ballistic testing to determine possible usage in the commission of crime,” the police said.

Counterfeit clothes and sneakers were found in different buildings. Some clothes were found loaded in 46 vehicles in one of the buildings.

“The confiscated goods will be disposed of in a similar manner as the last public disposal of over R500m worth of counterfeit goods in April this year,” the police said.

Meanwhile, seven police officers were arrested for corruption and defeating the ends of justice after the crackdown on Wednesday.

“In the first incident, a warrant officer and four constables were arrested at Johannesburg Central police station after they were caught trying to resell confiscated goods back to the illegal traders,” said the police.

In another incident, two tactical response team members were arrested after police investigated a possible leak of information about the planned operation in the CBD.

"Police believe the loot found in the 46 vehicles in the basement parking at Lister Building could be the cargo that was removed the night before after the illegal traders had received a tip-off."

Gauteng provincial commissioner of police Lt-Gen Elias Mawela has commended the crime intelligence and anti-corruption units  for “sterling” work during the raids.

“We certainly hope that the arrest of seven of our own will prove to the people of Gauteng that we are serious about eradicating crime. No one is above the law,” Mawela said.

He said the raids had become regular occurrences since the launch of operation O Kae Molao.

Gauteng premier David Makhura said: “As South Africans we must work collectively to build our economy and create much-needed jobs. We need to make a significant dent in the illegal trade of counterfeit goods as they pose an economic risk to the country."

Police minister Bheki Cele, who visited the operations in the CBD on Wednesday, said: “Bravo to the SAPS, we remain resolute of the capabilities of our men and women in blue. We told the nation that we will continue to stamp the authority of the state.

"We cannot have parallel governance with criminals. Therefore we will continue to squeeze the space for criminals to zero regardless of race, gender or nationality.”

Police returned to the Johannesburg CBD in an attempt to crack down on counterfeit goods and illegal activity. Gauteng premier David Makhura confirmed that about 600 people were taken in to verify whether they were documented.

Gauteng police have arrested seven of their own for corruption and defeating the ends of justice for allegedly attempting to resell confiscated goods ...
News
3 years ago

Police returned in force to crack down on counterfeit goods and crime in the Johannesburg CBD on Wednesday.
News
3 years ago
Next Article