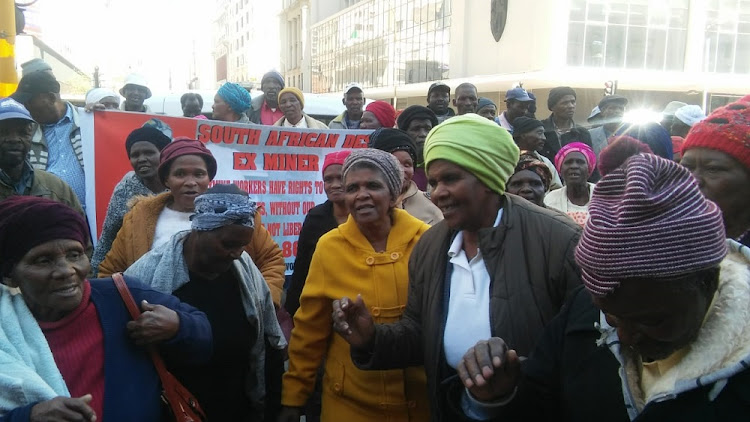 Families of the silicosis victims sing outside the South Gauteng High Court where a settlement with certain mining companies was presented.
Image: Penwell Dlamini

Thousands of mineworkers will finally receive compensation for contracting tuberculosis and silicosis from a number of gold mines they worked for from 1965 to date.

On Friday‚ the full bench of the Johannesburg high court endorsed an agreement that had been concluded between mining companies and workers suffering from silicosis and TB.

The law firms and a number of mining companies reached a R5bn agreement in May last year after three years of extensive negotiations between the workers and the companies — African Rainbow Minerals‚ Anglo American SA‚ AngloGold Ashanti‚ Gold Fields‚ Harmony and Sibanye-Stillwater.

In December last year‚ the high court provisionally approved the settlement. The court then gave interested parties time to object against the provisional order.

The agreement provides compensation to all eligible workers suffering from silicosis and/or TB who worked in these companies' mines from March 12 1965 to date.

The mining companies last year announced amounts that each has provided for the estimated cost to them of the settlement based on actuarial assessments. These amounts totalled about R5bn.

There are 10 classes of claimants‚ including dependents of deceased mineworkers who – once properly certified—would be eligible for a benefit ranging from R50‚000 to R500‚000.

Any claimant who has a qualifying claim will receive the compensation due to him or her during the lifetime of a trust being set up by the parties.

The trust will notify the companies annually of the estimated amounts required to pay out the claims.

An actuarial expert will be appointed to help in these calculations.