No third-party claims in landmark silicosis settlement deal for mineworkers 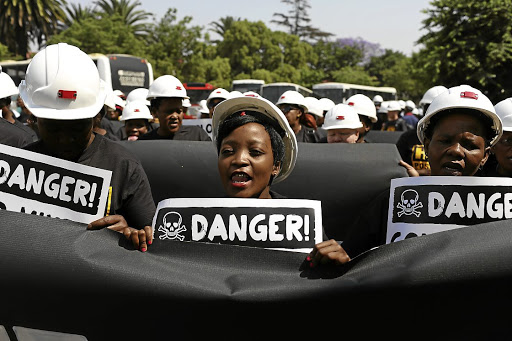 The court heard that one of its main tasks was to ensure that the interest of the those who were absent from the negotiations were taken into account.
Image: LON SKUY

No third party will be allowed to represent claimants in the silicosis settlement deal between mineworkers and their employers.

This was the first assurance that was made by lawyers representing groups that were part of developing an historic settlement for the victims of silicosis in the mines.

Gilbert Marcus, SC, representing the Legal Resources Centre, told the South Gauteng High Court on Wednesday that one of the main tasks of the court was to ensure that the interest of the those who were absent from the negotiations were taken into account.

He described the negotiation process which had led to the settlement as complex and lengthy.

Marcus said there was no collusion among the parties during the negotiations, which took three years to conclude.

He added that the settlement was designed to ensure that it does not enrich organisations that had been involved in the negotiations at the expense of the class members.

In the deal the mining companies will make an initial contribution for benefit payments of R1.4bn for the first two years.
News
2 years ago

The court is looking into the draft settlement and once approved a trust will be set up to do the work of finding the potential claimants and facilitating the process.

The draft settlement, which is the first of its kind in the country’s history, was reached by the Legal Resources Centre‚ Abrahams Kiewitz Inc and Richard Spoor Attorneys‚ who represented thousands of mineworkers‚ and the Occupational Lung Disease (OLD) Working Group‚ who represented African Rainbow Minerals‚ Anglo American SA‚ AngloGold Ashanti‚ Gold Fields‚ Harmony‚ Sibanye Stillwater and Pan African Resources.

Former miners and their families say they are very happy with the latest technological developments that will help them register for claims in what ...
News
3 years ago

In the deal, the mining companies will make an initial contribution for benefit payments of R1.4bn for the first two years.

The draft settlement, which was signed in Johannesburg this year, provides for medical examination and compensation of mineworkers who worked in gold mines from March 12 1965 to date.

Mining companies will contribute R845m in administration costs to the trust. Mineworkers’ benefits will increase annually in line with inflation from the third year of the trust. In the draft settlement, there is no limit to the number of potential claimants and individuals can opt out if they wish to do so.