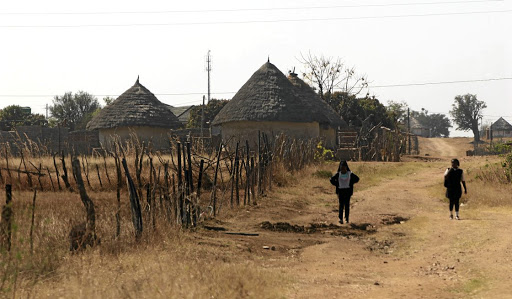 The two pupils who were raped on their way home from school by unknown panga-wielding men fear going back to school.

The mother of one of the survivors in Limpopo told SowetanLIVE her 16-year-old daughter was struggling to sleep and could barely eat.

Three pupils from Tshimbupfe Secondary School in Hanani village were on Tuesday attacked and two of them raped in the bushes, while on their way from a school in Thondoni village, 4km away.

"She is now fearing going back to school because she is still going to use the same road to and from school.

"My poor daughter is no longer the same after the horrible incident. She was always active and energetic but all that has disappeared."

The mother said her daughter told her that she was walking with her two friends when they were attacked.

"My daughter said they were followed by a man in the middle of their trip who kept on speaking on the phone. She said when they started to suspect that they were being followed, they increased their pace and so did the man too.

"Immediately, when they wanted to run, another man came from the bushes and threatened to chop them with a panga."

The mother said the suspects ordered the three pupils into a secluded area where two were repeatedly raped.

"She said they were ordered to undress and open their legs before the men took turns raping them.

"They were told that they must not say anything to anybody if they wanted to live."

The mother said she wants the police to arrest the two men and send them to jail.

Police spokesperson Col Moatshe Ngoepe said they have launched a manhunt for the two unknown suspects who attacked the girls.

An aunt of an 18-year old survivor said the incident had left her niece broken and traumatised. "I have been sharing a bed with her because she is afraid sleeping alone since the rape took place. She says she is not looking forward to go back to school because she is going to be a laughing subject."

Police are searching for two men who allegedly raped two school girls while they were walking home from school in Vuwani, Limpopo.
News
2 years ago

The 35-year-old aunt told SowetanLIVE her niece arrived home at 7pm on Tuesday.

"She walked in the house and dropped her school bag on the floor. She went straight to the point and told me she was raped.

"I was shocked and immediately went to call the elders who called the police. I think they are lucky they were not killed, unlike other incidents we hear in the news," she said.

She called on government to provide scholar transport for the safety of the children.

Education MEC Polly Boshielo urged community members with information that may assist in the swift arrest of the suspects to come forward.

"As a department, we are appalled by this incident.

"All of us, working with the police, must leave no stone unturned in ensuring that the alleged perpetrators are arrested and brought to book without any delay," Boshielo said.

The department will send psycho social professionals to the school for counselling.