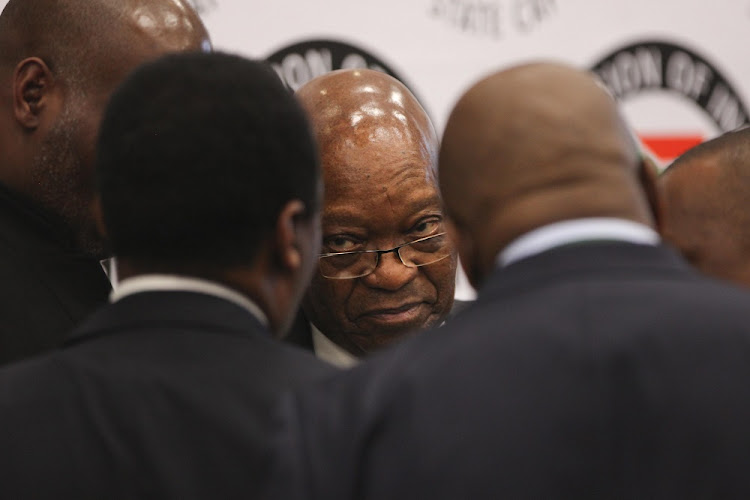 Judge Raymond Zondo is mediating with former president Jacob Zuma and his legal counsel (pictured) as well as the legal team for the commission of inquiry into state capture July 19 2019.
Image: Alaister Russell/The Sunday Times

Former president Jacob Zuma has changed his mind, now agreeing that he will continue to give evidence to the state capture inquiry - but it will be done on his terms.

Zuma will not appear before the commission any time soon, however.

After an adjournment on Friday, during which deputy chief justice Raymond Zondo consulted Zuma's and the commission's legal teams, he announced a way forward in which Zuma would be made to submit statements to the commission based on clearly indicated allegations that have been levelled against him.

Zondo had adjourned proceedings on Wednesday when Zuma said he had a problem with the commission's evidence leader Paul Pretorius's line of questioning.

Zondo gave the legal teams a day to resolve the impasse but on Friday Zuma's lawyer Muzi Sikhakhane said Zuma had decided to withdraw from proceedings. Zondo then intervened to find a way forward.

Deputy chief justice Raymond Zondo has announced that he will intervene to resolve the impasse between his legal team at the state capture inquiry ...
News
2 years ago

"I have had a discussion with counsel for the former president and counsel for the commission in regard to the issue that they were supposed to deal with yesterday. It was a very fruitful discussion again characterised by respect, courtesy and a high level of professionalism," Zondo said.

Zondo described what will now happen, saying the commission’s legal team will indicate to Zuma's lawyers what its areas of interest are in each witness's statement or affidavit on which the commission would like the former president to testify.

Thereafter, Zuma will provide, through his legal team, statements that indicate his responses to these aspects.

This process is expected to take more than two weeks.

"The agreement is that counsel for the former president will meet before the end of the next two weeks with a view to the commission's legal team making available a document which indicates exactly which areas in the various affidavits of witnesses they would like the former president to give information about," Zondo said.

"It is contemplated within this agreement that at a certain stage the former president will come back and give evidence and it is contemplated that with the process that has been agreed to by all sides, it may well be that the time in which he needs to testify might be shortened."

The commission will continue on Monday when it will hear evidence regarding the Estina dairy farm scandal.

Deputy chief justice Raymond Zondo's mediation to resolve the impasse between his legal team at the state capture inquiry and that of former president Jacob Zuma has been successful.

Zuma has rescinded his decision to withdraw from the commission proceedings.

Judge Zondo said the two legal teams will need to discuss timeframes in which witness statements can be dealt with. If they cannot find a timeframe, Zondo will then intervene.

Zondo announced that he would intervene to resolve the impasse after Zuma's lawyer, Muzi Sikhakhane, earlier on Friday told the commission that Zuma would no longer participate in the commission's proceedings.

Zondo had adjourned proceedings on Wednesday when Zuma said he had a problem with the commission's evidence leader Paul Pretorius's line of questioning. Zondo gave both legal teams one day to resolve the impasse.

"I am disappointed that yesterday [Thursday] a situation was allowed to happen where I went to bed without knowing how the discussion between the commission's legal team and the former president's legal team were going," Zondo said on Friday.

"I had hoped and I may have indicated to both teams in chambers that I would need to be informed and I had in mind that if by a certain time I took the view that there were challenges in reaching agreement, I thought that there may have been room for me to contribute to the resolution of the impasse. I would have considered meeting with both teams."

Zondo adjourned proceedings on Friday and called both legal teams to meet him in his chambers to discuss a way forward.

"I have heard what Sikhakhane has said are his instructions from his client... that he does not intend to participate anymore. I do intend, nevertheless, before we reach finality on this matter, to have a session with counsel for the former president and counsel for the commission in my chambers," he said.

"I do have ideas of my own that I would like to discuss with them to see whether we can't find a situation where the concerns raised by the former president can be accommodated without compromising the job the commission's legal team has to do."

Zondo is expected to announce the way forward by 1pm. 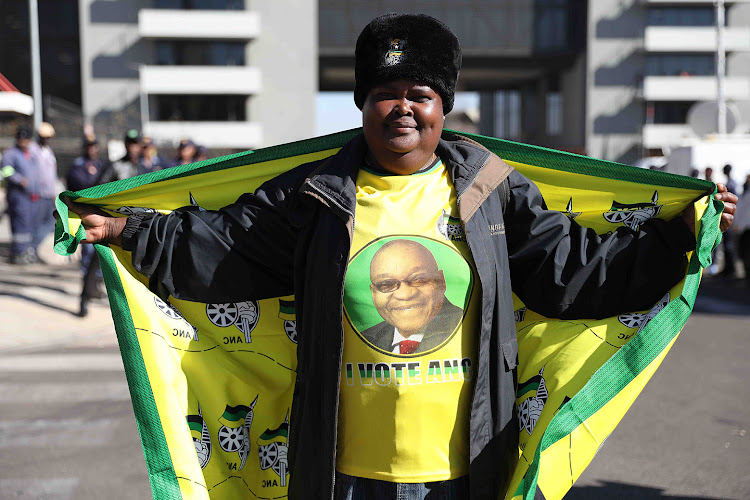 10.17am: Jacob Zuma pulls out of state capture inquiry

"We will take no further part in these proceedings."

This is the announcement on Friday morning by former president Jacob Zuma's lawyer, Muzi Sikhakhane.

Zuma has withdrawn from proceedings at the commission of inquiry into state capture because he believes that it has thus far been been biased against him, Sikhakhane told the judicial inquiry led by deputy chief justice Raymond Zondo.

"We will take no further part in these proceedings. You will recall that on Monday I expressed my reservations that a commission, which is a creature of statute, which has set-out ground rules, writes a letter in June to say 'we are calling your client in terms of no rules'. We expressed our reservations because this commission at all times has to comply with its ground rules," Sikhakhane said.

"Those nine witnesses in terms of which my client has been brought here ... Basically, our client from the beginning was treated as someone who must come and answer, as someone who is accused. Everyone who came had a grievance against him.

"This commission does not know who is guilty, it's trying to find out.

"A legal process must be cleansed of prejudices which come from outside ... We therefore submit to you that there is something irrational about a parallel approach to the witness.

"We've come to tell you that because of the reservations we've raised and our experience in this room that my client has instructed me that he will take no further part in these proceedings."

The commission's evidence leader, Paul Pretorius, said Zuma's legal team was expecting that the commission deviate from its rules and allow Zuma to testify without questioning him on the allegations levelled against him.

"There has been no agreement to deviate from any of the rules. We are quite happy to proceed in terms of the rules ... The commission's legal team has and will continue to exercise all the powers and perform all the duties of the commission," he said.

"The commission's legal team wishes to place on record that it has not made and does not intend to make any concessions.

"All witnesses are equally entitled to fair procedures," said Pretorius.

Zuma, he said, "has not yet been cross-examined. He is still in the process of being questioned to elicit his full response in detail in respect of the nine witnesses who implicated him. Cross-examination will be addressed in terms of the rules when it arises."

"We cannot enter into any arrangement that will deviate from those rules. We will seek to enforce, follow and apply the rules."

Controversial ex-SABC chief operating officer Hlaudi Motsoeneng was in attendance at the state capture inquiry on Friday, where Zuma had been expected to resume his testimony following a day-long adjournment in his testimony. 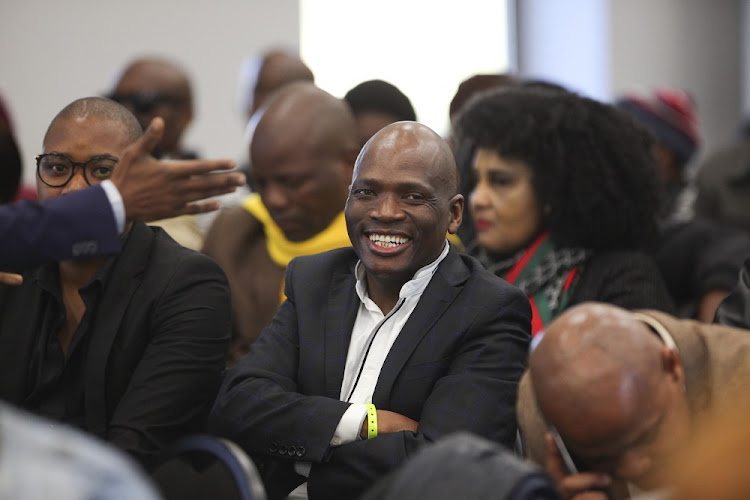 Zuma arrived in a convoy of luxury vehicles under police escort and to chants of his name by his supporters inside the Parktown, Johannesburg, venue.

Ahead of his appearance, a pre-recorded interview with Sizwe Mpofu-Walsh was released, during which Zuma was asked if he had any regrets about his time in the presidency.

"Not at all, I have no regrets," Zuma responded.

#JacobZuma arrives at the #StateCaptureInquiry. No smiles today, he's all business. Just a wave to his supporters in the public gallery who chanted his name as he walked in. pic.twitter.com/xGhNlGX3yR

Former SABC COO Hlaudi Motsoeneng says he cautioned Former President Jacob Zuma about his appearance at the Zondo Commission and that the ANC will send him to jail #StateCaptureInquiry @KayaNews pic.twitter.com/RtjkzKH9TM

The adjournment was requested by Zuma's legal team on his third appearance before the commission on Wednesday, when Zuma said he had a problem with the commission's evidence leader Paul Pretorius's line of questioning.

Zuma was being quizzed on allegations by former public enterprises minister Barbara Hogan that he, in 2009, had insisted on the appointment of Siyabonga Gama as Transnet chief executive. The commission was asking Zuma questions about the normal procedure when it came to the appointment of executives at state-owned entities.

"I am being made to go through the details that are the details of the officials and expected to remember every other detail on work that is generally done by director-generals and officials. I am not an officer or cabinet secretary.

"The manner in which I am being asked questions on the details that I can't even remember properly because I was not working on those details," Zuma said.

His lawyer, Sikhakhane, then jumped in.

"I have a view that my client was brought in here under false pretences and I need him to make up his mind if he wants to be cross-examined. Now it's clear to me he is being cross-examined on what people say," he said, when requesting the adjournment.

Deputy chief justice Raymond Zondo, who is chairing the inquiry, adjourned proceedings until Friday to allow both legal teams to find a way forward.