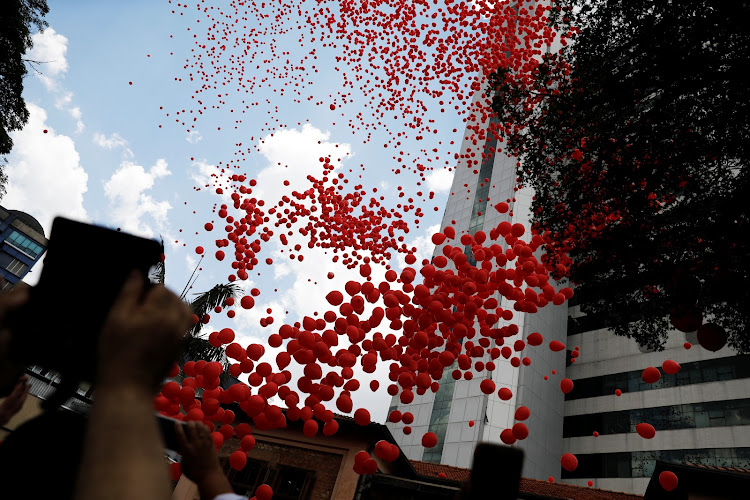 A purple line shows South Africa's remarkable success in turning around the carnage of HIV/Aids in children. It illustrates an analysis which concludes that SA is on course to meet the UN goal of cutting child deaths to 25 per 1,000 by the end of the next decade.

The graph shows HIV/Aids deaths among under-fives rising sharply between 1997 and 2005, but declining steadily until 2011. Fatalities among newborns overtook HIV/Aids to become the biggest contributor to child deaths in 2011 and 2012.

"Conditions related to prematurity and birth asphyxia, together with infections, account for a large proportion of neonatal deaths," a team from the Medical Research Council report in the SA Medical Journal.

The researchers' analysis of the second national burden of disease study also found massive inequalities in health. "The risk of a five-year-old child dying in KwaZulu-Natal, a relatively poor, rural province experiencing the highest levels of HIV prevalence, was in 2012 still 2.8 times higher than the risk of a child living in the Western Cape, one of the wealthiest provinces experiencing the lowest levels of HIV," said the study. The number of children who died fell by almost 77% between 2005 and 2012, according to the authors. Most of that reduction was due to the decrease in HIV/Aids deaths.

Whether we like it or not, children need to be educated about sex.
Opinion
2 years ago

"Despite the devastating effect of HIV/Aids epidemic, child mortality has declined to levels below those in the early stages of the epidemic," said the researchers, who worked with academics at the University of Cape Town.

This was "largely owing to provision of prevention of mother-to-child transmission and ARVs to women".

The successes could be even greater if the poorest-performing provinces - KZN and Limpopo - became as effective as the best, which the study listed as Western Cape, Gauteng, Free State and Mpumalanga. Now that neonatal mortality was the leading cause of child deaths, there was a need to prioritise this issue, researchers said.

They also identified diarrhoea and lower respiratory infections as areas where more should be done and pointed to the success of two initiatives in Soweto that could be replicated.

HIV shows an increase among youth

Health Minister Aaron Motsoaledi has blamed parents for the high HIV infection levels among young people, saying he was criticised when he tried to ...
News
3 years ago

The introduction of a vaccine to prevent diseases including pneumonia, meningitis and bronchitis led to 39% fewer hospitalisations in 2014. And the addition of the rotavirus vaccination temporarily reduced child hospitalisations by up to 57%.

The researchers said they had to perform mathematical gymnastics to work out how many children were dying, and called for "urgent intervention" to improve registration of births and information on death certificates.

But they said the "rapid reduction" in childhood mortality since 2005, which meant only 40 out of 1,000 under-fives died, "suggests that the 2030 sustainable development target of 25 per 1,000 is achievable".

Health services to the children in Gauteng are steadily improving, the department said on Sunday The transmission of HIV from mothers to their babies ...
News
8 years ago

A TRIP by two students to an orphanage in Bloemfontein in Free State has convinced them to do more to help. Medical students Lieschen Branders and ...
News
8 years ago
Next Article