Parliament to probe 'unbecoming and uncharacteristic' conduct of MPs after fracas 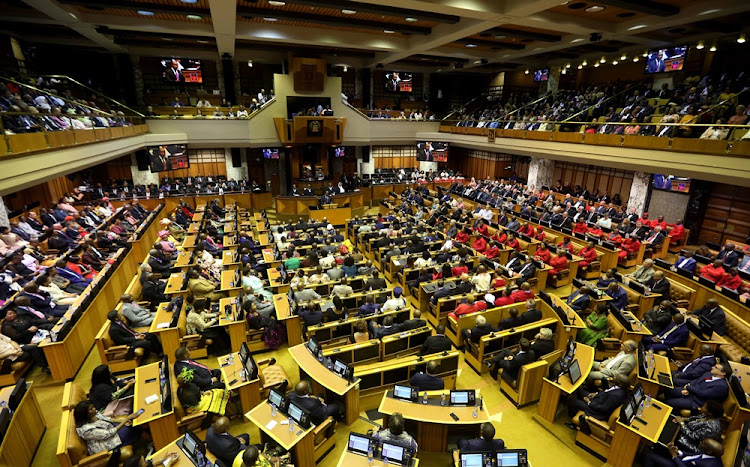 EFF and ANC members clashed during an induction session in parliament on Wednesday.
Image: Esa Alexander

Parliament is going to investigate the “unbecoming and uncharacteristic” conduct of MPs after they clashed during an induction session on Wednesday.

Video footage showed ANC and EFF members of parliament at each other's throats.

Parliament said in a statement on Wednesday evening, on behalf of National Assembly speaker Thandi Modise: “Modise has strongly denounced the conduct of a handful of MPs involved in the incident as unbecoming and uncharacteristic of honourable members of parliament.”

It added: “The speaker (Modise), who was in attendance but not chairing the session, took to the podium and appealed to Members (MPs) to adhere to the decorum and respect the authority of the chairperson of the session.”

Modise said different views are acceptable, but rebuked MPs for allowing “emotions to get the better” of them in “such fashion”.

It’s training for new MPs. Training. But the EFF can’t help themselves. pic.twitter.com/AT7SzDYCZc

The National Assembly and National Council of Provinces (NCOP) hosts an week-long induction and orientation programme for MPs. It will finish on Thursday.

DA MP Annelie Lotriet, who was chairing the session, said Modise was forced to intervene as matters degenerated when EFF and ANC MPs threatened to attack each other during the induction session on law-making.

Lotriet said: “The first round of questions went well and in the second round a member of the EFF stood up and started with a speech instead of asking a question. As I could hear from the interpretation he was also insulting the ANC, so the ANC got quite upset. So I then intervened and asked the EFF member to please stop and refrain.”

An assault case against EFF MP Marshall Dlamini was postponed until June 5 in the Cape Town magistrate’s court on Tuesday.
News
3 years ago

“She kept on talking and then it was a toing and froing between the EFF and the ANC. The member of the EFF started walking across the floor with other members of the EFF following her towards the ANC, and the ANC then started to retaliate.”

Lotriet said it was at that point that Modise was called in to diffuse the tension that lasted for around three minutes.

“The speaker then came in and had to physically intervene between the two groups. She gave them a dressing down, which was necessary and we then proceeded … all in all it was three to four minutes.” - Additional reporting by Thabo Mokone

We 'sorted him out', says EFF MP caught up in parliament slapping fracas

EFF MP Marshall Dlamini said that he was dealing with a “racist clown” when he threw a slap just outside of Parliament following the state of the ...
News
3 years ago

Little evidence dramatic performers EFF capable of achieving much after 'pay back the money' campaign.
Opinion
3 years ago
Next Article