Zuma hits back at Malema and the EFF over SONA debacle 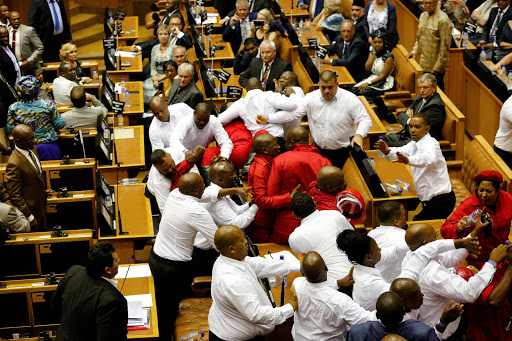 Security officials remove members of the Economic Freedom Fighters during President Jacob Zuma's State of the Nation Address (SONA) to a joint sitting of the National Assembly and the National Council of Provinces in Cape Town, South Africa. Picture Credit: REUTERS/Sumaya Hisham

President Jacob Zuma says he is not bothered by the spate of insults spat angrily at him across the national assembly floor before the Economic Freedom Fighters were ejected from Parliament.

He described the EFF‚ under the leadership of Julius Malema‚ as an “angry minority in the country”.

Zuma ripped into his critics after the chaotic State of the Nation event during a TNA Breakfast Briefing a – likely sponsored by government — in Cape Town on Friday.

He chose his words carefully but there was little doubt that they were meant for Malema.

Asked whether the SONA debacle – in which he was called a constitutional delinquent – was symbolic of a divided nation‚ he laughed. Then cool as a cucumber‚ seated in a leather chair‚ he elaborated: “We are dealing with people who have quarrels with their colleagues‚” he said.

“If for an example you are dealing with an organisation that was established by young people who were expelled from the ANC‚ they must be angry with the ANC. They must be trying their level best to fight back but they don’t know how.”

These people‚ he added‚ frustrated debate yet called themselves democrats.

“Democracy is not about angry young people. Democracy is about debating things. Debating what we need to do for our country.”

He said the fracas caused in Parliament “does not bother me”. It was no different‚ he added‚ to fighting against a lunatic apartheid government during the struggle.

His comments were broadcast on the ANN7 news channel. — TMG Digital