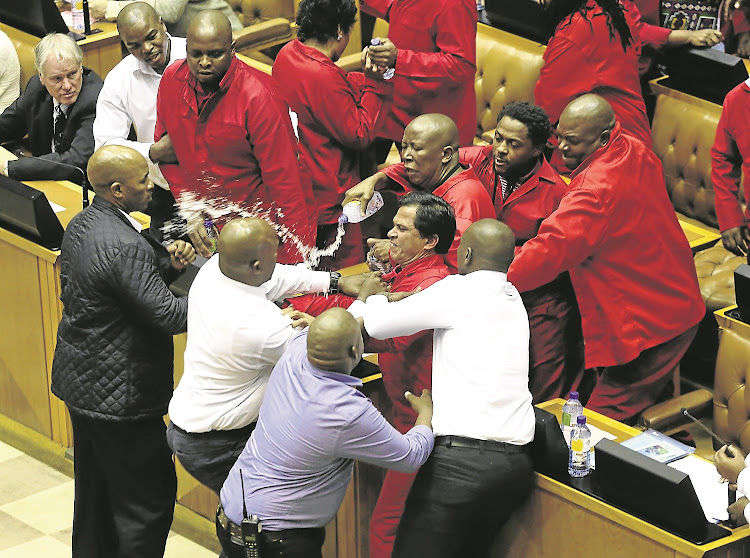 EFF leader Julius Malema and DA chief whip John Steenhuisen dug in their heels and refused to withdraw inflammatory and unparliamentary statements they made in the National Assembly during President Cyril Ramaphosa question and answer session on Tuesday.

The two senior MPs got off lightly‚ though‚ as chairperson Thoko Didiza threw both out of the House very late on Wednesday after their refusal to withdraw their statements. But a number of other MPs who were involved in the scuffle that broke out following their remarks – including Agang SA’s Andries Tlouamma and EFF’s Nazier Paulsen - will have to appear before the parliamentary disciplinary committee.

Announcing her ruling‚ Didiza found Steenhuisen’s reference to Malema and another EFF MP Mbuyiseni Ndlozi as “VBS looters” to be unparliamentary.

“It’s always unparliamentary to insinuate another member is acting dishonorably whether directly or by implication‚” said Didiza.

Steenhuisen uttered the remark on Tuesday as Malema and Ndlozi kept interjecting as he sought to address Didiza on a point of order.

Didiza ruled that his remark was derogatory and impugned the two EFF leaders’ integrity and dignity‚ and that it was not substantiated in terms of the rules.

Steenhuisen refused to withdraw his remark and received a standing ovation from his caucus as he was shown the door.

Didiza then turned on to Malema‚ who in response to Steenhuisen’s remark referred to the DA chief whip as “you racist young white man” and “a racist young man who was accused of rape”.

“It is never allowed to call another member racist no matter the context. You went further and accuse the member of a crime as heinous as rape without any substantiation‚” said Didiza on Wednesday.

She ruled that Malema’s remarks were derogatory‚ verbally abusive and unsubstantiated.

He was instructed to withdraw from the House‚ and the EFF contingent left with him.

But on its way out‚ two EFF MPs‚ Godrich Gardee and Hlengiwe Mkhaliphi had what appeared to be a heated confrontation with a DA MP.

Didiza ruled that the trio will be referred to the disciplinary committee.

Didiza also ruled that Tlouamma‚ Paulsen and all the MPs who were involved in a fracas on Tuesday will face a disciplinary process.

Tlouamma had verbally engaged EFF MPs and uttered an expletive. A bottle of water was thrown at him from the EFF benches in response and a fight broke out. Didiza said the disciplinary committee will consider the merits of each case.