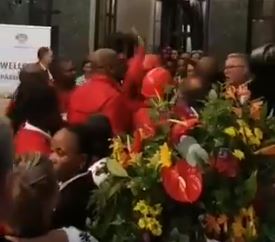 EFF leaders were involved in a scuffle in parliament.
Image: Screengrab

A video has emerged of an EFF MP slapping a man in a suit during an altercation after the state of the nation address (Sona) in parliament on Thursday.

EFF deputy president Floyd Shivambu and party leader Julius Malema are seen walking with MPs in red overalls in the 14-second video. In the background is a banner saying "Welcome to Parliament".

Suddenly, voices are raised and fingers are pointed at a man in a suit wearing glasses - possibly a police official.

The man in the suit retreats as EFF members gather around him. Then one of the EFF MPs delivers a stinging slap to the man's face.

It is unclear during all the shouting what the altercation was about. Security officials swiftly intervened and escorted Malema and his entourage from the commotion.

Video footage has emerged of EFF MP Marshall Dlamini slapping a man after the Sona address on Thursday, February 8 2018. In a statement from Parliament, national assembly speaker Baleka Mbete and national council of provinces chairperson Thandi Modise said they "denounce in the strongest terms the alleged assault of a police officer stationed at parliament by a member of parliament from the Economic Freedom Fighters (EFF)."

"We were waiting for the presidential procession to leave. The police and security were in front of us. They were very courteous and said we should wait.

"The EFF came and said, 'sorry we have work to do' and they pushed through."

Swart said he did not see the person being slapped, but heard a sound of a "big smack".

"I saw someone who I thought was a police officer in civilian clothes, with blood on his cheek," he said.

Swart described the incident as "disgraceful".

"It's illegal for them to slap someone," he said.

The EFF and parliament were not immediately available for comment.

Social media commentators have identified the man suspected of slapping as Marshall Dlamini. TimesLIVE has not been able to independently verify his identification. Dlamini has not been answering calls to his phone.

Dlamini joined the EFF when it was founded in 2013, and became an MP two years later. The KwaZulu-Natal businessman owns a home in Centurion but his other assets are undeclared as they are shielded behind a family trust.

He serves on parliament's public enterprises and energy portfolio committees. His attendance record improved dramatically last year, to 94%, up from 36% in 2017 and a poor 28% in 2016.

In September 2016, Dlamini was reprimanded by parliament's deputy speaker, Lechesa Tsenoli, for calling Des van Rooyen a "useless minister", during the latter's role as minister of co-operative governance and traditional affairs.

In January 2016, the EFF MP was accused of not paying business people who helped him complete a multimillion-rand SA National Defence Force (SANDF) project, the Sowetan reported. The amounts involved were R250,000 and R35,000 from two claimants.

Dlamini responded to say he had resigned from his company, Eyethu Translodge and Plant Hire, before being sworn in as an MP and had sold it. This was confirmed by Companies and Intellectual Property Commission records. Dlamini said the new owners took over the company's debt.