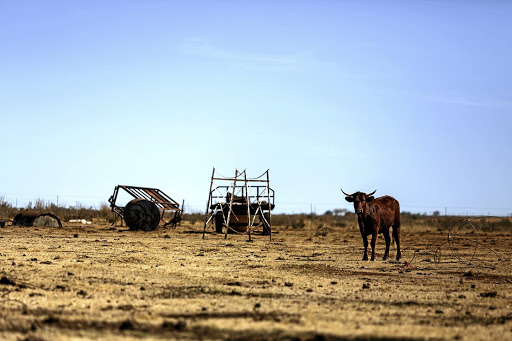 Greedy politicians have grabbed farms for themselves, which they have then allowed to deteriorate while genuine black farmers have struggled for land, the writer says. /Moeletsi Mabe

South Africa is vulnerable. A young hothead with a sonorous voice can wake up one morning, wear a red beret and get the entire country to chase shadows.

That is what Julius Malema has done. People are now running up and down and expending their hot air on land simply because Malema does. Even the Zulu king has felt the need to convene a tribal imbizo to threaten war in response to what he calls "disrespectful children" - the EFF.

We all know the current land debate was never initiated by the ANC. At Mama Winnie's funeral, Cyril Ramaphosa asked Malema to take him to Marikana. In other words, the ANC is happy to be led by the Zulu king's "disrespectful children".

The problem with EFF-led debates is that they make people very angry, and in the end produce nothing. Other than the "pay back the money" campaign, there is little evidence the EFF is capable of producing anything. That they are dramatic performers is obvious.

There was a time when the EFF marched to the JSE to present a list of demands. They threatened to go back if their demands were not met. Not one of those demands was met. Did the EFF go back?

At some point the EFF threatened to occupy all Absa branches. Were EFF leaders given something to make them stop threatening the bank? Only God knows.

Even where the EFF did occupy - H&M - it is still difficult to show exactly what the whole fracas ultimately produced.

All serious legal minds have repeatedly pointed out that section 25 of our constitution does not prevent land expropriation. But the EFF does not stop insinuating that the constitution is a problem.

It even offered votes to the ANC to amend it. The real thing here is not land, it is noise about land - hence the focus on what is not the problem, the constitution.

President Cyril Ramaphosa has assured Zulu King Goodwill Zwelithini that the government will not expropriate land under the controversial Ingonyama ...
News
3 years ago

Even if the constitution were a problem, there would still be no need to waste money and hot air on theatrical consultative meetings. A good lawyer could simply be enlisted to advise parliament on how to craft an enabling constitutional amendment to give effect to land expropriation - and politicians would vote. Have you ever seen a crowd drafting a constitutional amendment?

What the EFF wants is noise about the constitution so that the masses out there can think that the party is doing something. That is the point of consultative meetings.

On its part, the ANC does not want to be outshone. But the party is not serious about land redistribution. What has the ANC done over the past 24 years to give land to black people? Given that the party has done nothing, is it not madness to expect the very same ANC to do something urgently? The ANC does not want to redistribute land to black people simply because its leaders have distributed land to themselves.

The party president, Cyril Ramaphosa, is not a landless man. The public would be shocked to know how many hectares of land Ramaphosa personally owns. He even has a farm in Mpumalanga where he keeps Ugandan cattle with monstrously oversized horns. Ramaphosa's beasts are never slaughtered for you and I to get beef at our nearest supermarket; they are kept there for display to his friends when they have a weekend out. The cattle are trophies.

President Cyril Ramaphosa has appointed an inter-ministerial committee (IMC) on land reform‚ to be chaired by Deputy President David Mabuza.
News
3 years ago

We also know Thandi Modise, another ANC senior leader, has a farm where pigs eat pigs. Gwede Mantashe, too, has a farm in Eastern Cape. Such are the people who have done nothing to give land to black people over the past 24 years. They have focused on themselves. Why must we take them seriously when they make noise about land?

The pity in all the unfolding drama about land is the spectacle of politicians driving Mercedes-Benzes into poor communities to "listen" to ordinary people, and drive out to the nearest hotel at the end of the day. In Kenya politicians are called waBenzi (the Benz people).

In the end, nothing will happen. The EFF will make black and white people angry and go to their expensive hotel to eat and drink. Indeed, South Africa is vulnerable.