Mashaba warns that heads will roll over eviction 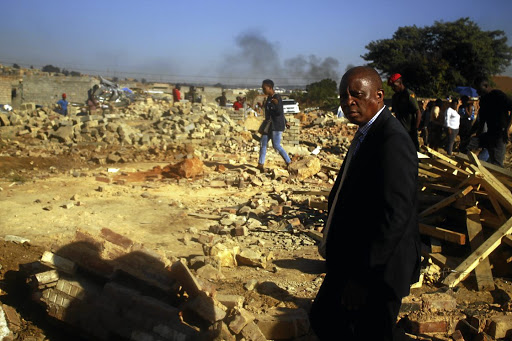 Johannesburg mayor Herman Mashaba has promised to rebuild the destroyed homes despite the structures being built illegally in Alexandra.
Image: KABELO MOKOENA

Johannesburg mayor Herman Mashaba has warned that city officials who agreed to the demolition of houses in Alexandra will face the consequences.

This comes days after hundreds of people were left homeless when evictions were carried out in the township on Friday. Mashaba visited the area yesterday where about 80 structures were reduced to rubble, apparently because they were built too close to the Jukskei river.

"I am currently waiting for a report from the JMPD [Johannesburg Metro Police Department] about what happened here. I'm expecting it within the next 24 hours and I promise you there will be consequences," Mashaba told the media shortly after addressing the community.

He said he was left angry after finding out that the order used to carry out the evictions was obtained in September 2016.

"It's clear that this was not an act based on the order, the decision was based on something more sinister. Evil forces were behind this and we will get to the bottom of it," the mayor said.

Mashaba, who was accompanied by MMC for housing Meshack van Wyk, promised the community that the city would rebuild the torn down structures within the next month. "When we took over the office we made it clear that all evictions and demolitions in the city need to be brought to my attention," he said.

The ANC released a statement at the weekend, describing the evictions as inhumane and blamed the EFF and DA-run Joburg municipality.

"Rebuilding these structures is a matter of urgency. We understand that people built on this land illegally and they were equally removed illegally. But two wrongs don't make a right. What is important is that people have a place to live," Mashaba said.

Themba Radebe, 38, who had been living in the area for a year, said he hoped Mashaba would keep his promise because the community felt as though it was being targeted by government.