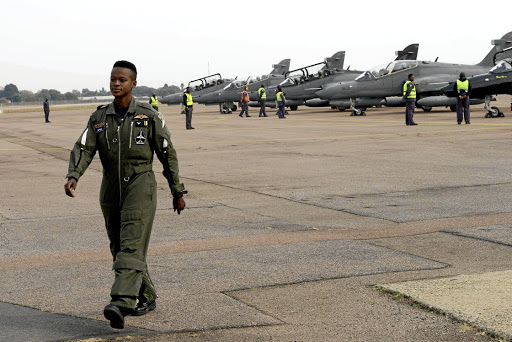 Major Mandisa Mfeka, who flew one of the five South African Airforce Hawk Mk 120 aircraft over Loftus Stadium on Saturday has described the historic moment as intense and requiring focus.

Mfeka, 29, who was part of the Hawk formation at the inauguration of President Cyril Ramaphosa, spoke to Sowetan about the high intensity moment yesterday.

She said she watched highlights of the inauguration on television.

"A lot of things were going through my mind, but mostly focusing on the work that we had to do. It is a high-intensity moment.

You need to make sure that you fly over at the correct time. You are watching out for the spacing of the formation to make sure that it is correct length and it looks good, and also that we make the target on time," said Mfeka.

"At that moment you really want it to look great. You really want to make our nation proud. But we also want to carry out the mission safely."

Mfeka is the country's first black female combat pilot. She was born in Durban and spent the first years of her childhood in Ntuzuma before moving to Malvern.

As a young girl, Mandisa ate sandwiches while sitting in the back of her mother's car and watched planes take off from Durban's Virginia Airport. This ignited her desire to become a pilot.

The fly-past, Mfeka said, took about 10 days of preparation, including administration.

South Africans took to Twitter to express their pride over Mfeka's achievements.

"I feel honoured and humbled but also accountable now that everybody is watching. I can't make the mistake of dropping the ball," she said.

Mfeka's father Themba Dlamini said watching his daughter take to the skies was emotional. Mandisa is one of his five children.

"I had that sense of pride that the Dlamini name was flying in the skies," he said.

Dlamini recorded the moment to ensure he could replay it later. He watched it again with his wife.

Dlamini wanted his daughter to become a doctor. However, he has no regrets over the path she has chosen.