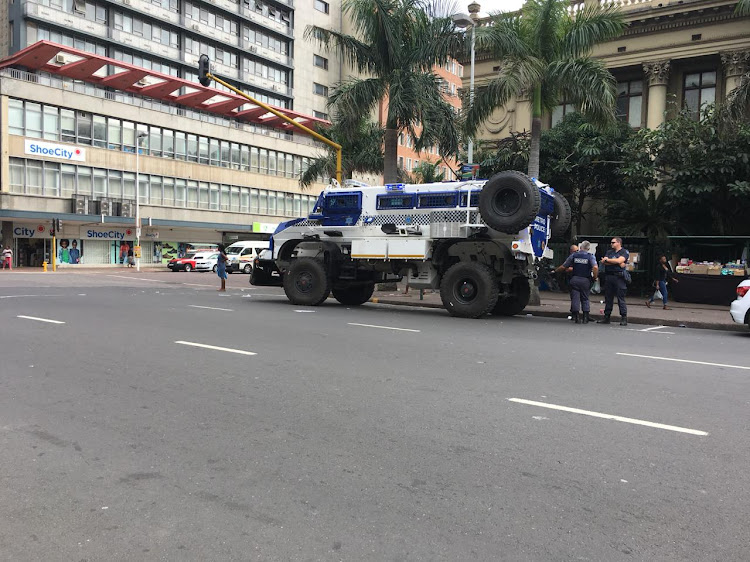 There was a strong police presence at the city hall in Durban, a designated special voting station, on Monday morning.
Image: LWANDILE BHENGU

A strong contingent of police surrounded Durban's city hall as voters trickled in to cast their special votes on Monday.

Independent Electoral Commission presiding officer Mamotsau Sithole said she was expecting 43 voters over the next two days. Her team was also expected to do four home visits.

The IEC set aside Monday and Tuesday for those who will not be able to make it to voting stations on May 8, because of health issues or work and other commitments.

The city hall precinct has been the scene of unrest since last week after striking municipal workers went on the rampage.

The municipality's water and sanitation employees took to the streets in protest over salary increases allegedly granted to uMkhonto weSizwe veterans employed in the department. Eleven were arrested and charged with public violence.

"We are not expecting any trouble because we have a strong police presence here."

Sithole said most people who registered for the special vote were either ill or working on May 8.

Mbongeni Zondi is one of the 43 people who applied for a Special vote at the Durban City hall #SAElections2019 #May8 @TimesLIVE @yasantha @SuthentiraG pic.twitter.com/8hbvNuX2mq

Mbongeni Zondi, a salesman, said that he cast his vote on Monday so that he could work and study on May 8.

"I want to use the day to study for my test on Thursday and to see clients."

Police have identified KZN and the North West provinces as the highest risks for violence during next week's general elections.
News
2 years ago