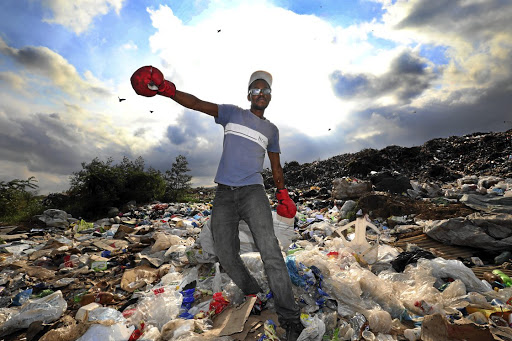 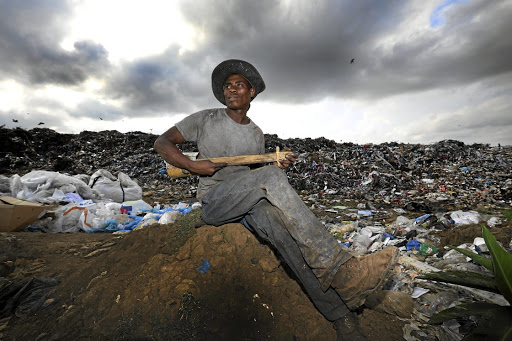 With her painted face that matches a grubby mustard-coloured ANC shirt, Philiswa Vamanda stands out in a mountain of filth.

The 22-year-old may be petite but she defiantly stands her ground as a waste picker at the often treacherous Msunduzi landfill in Pietermaritzburg, where sorting through the mountain of discarded human waste, plastic and other refuse to pick out saleable recyclables can often have dangerous consequences.

South African Waste Pickers Association secretary Nonhlanhla Mhlope said that over the past 12 years there have been 14 deaths and 17 injuries in the landfill vicinity because competition is rife and working conditions are dangerous.

Mhlope said attempts to report cases to police were often unsuccessful as police chased them away.

However, Pietermaritzburg police said they have no knowledge of criminal incidents at the landfill area.

A waste picker can make up to R2500 a week on plastic alone and can move up to eight tons of recycling from landfills every month. TimesLive takes a closer look at the conditions that these eco-warriors face.

Vamanda claims to have been attacked twice in March and last week she was forced to flee when a man in a balaclava threatened to kill her if she didn't stop working there and "stealing our jobs".

Sometimes Vamanda stumbles upon treasures like televisions, computers and laptops, but her main source of income is actually from plastic. She can make about R2,500 a week on plastic alone.

The money she earns looks after her unemployed aunt she calls "mother" and her school-going cousins as well as her one-year-old son Kwahle.

Vamanda, who had hoped to be a nurse when she grew up, left Matatiele looking for employment but entered the lucrative recycling business hoping her child will have better opportunities than she did.

On average 15,000 tons of waste is brought to the landfill monthly, 2,400 tons of which is domestic waste and more than 80 tons is "officially" recorded as being removed and recycled by the waste pickers. But the amount is certainly far higher as the pickers are not bound by office hours and many like Vamanda work around the clock, after the dump has closed.

Vamanda has a magpie's eye and is proud of the living she makes through it.

She has been recycling for the past two years but in the past year actually began sleeping in the dump afraid that somebody might steal her collected stash as competition is rife. She slept under a makeshift tent - a tarpaulin pulled over some of her "collect" and belongings.

But this is where she has come under attack by other waste pickers or chased away by security.

Landfill manager Cyril Naidoo said about 500 waste pickers work the site and acknowledged that "they are assisting us in reducing the waste that goes into the landfill".

"But the manner in which it is done is unsafe, they do not use the adequate and necessary protective gear, and although waste pickers are only allowed in the safer designated areas, they do not abide by this."

Naidoo only knows of one person who was killed by a compactor in 2014, but agrees this number could be higher in other incidents, including fighting among waste pickers.

'Please see us as workers': Waste collectors march for recognition

"We want them to take us seriously, not as nyaope people, but as workers."
News
3 years ago

'Please see us as workers': Waste collectors march for recognition