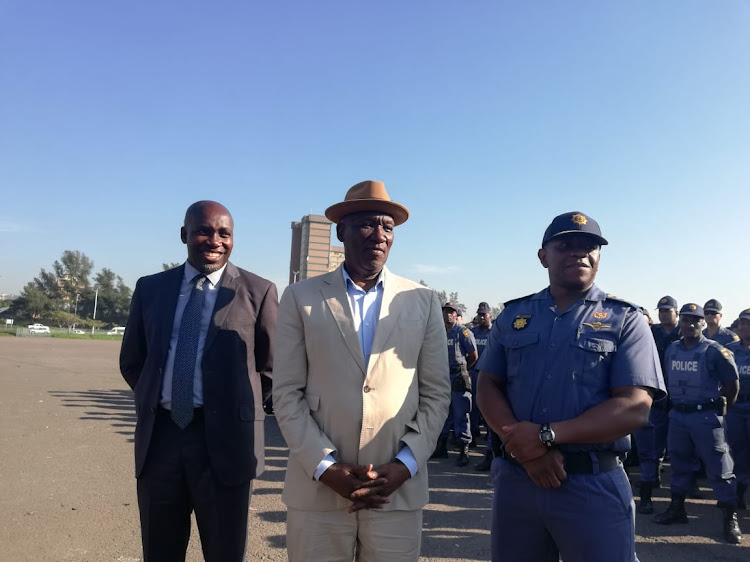 Transport, community safety and liaison MEC Mxolisi Kaunda, police minister Bheki Cele and Lt-Gen Nhlanhla 'Lucky' Mkhwanazi at a police parade in Durban on Friday where Cele advised police to keep cool heads ahead of the elections on May 8.
Image: LWANDILE BHENGU

Police minister Bheki Cele has warned KwaZulu-Natal police not to be tempted by unscrupulous politicians ahead of the national elections on Wednesday.

Cele told hundreds of Durban central police officers on Friday: "Don't get tempted by unscrupulous politicians who will come here and want to abuse you. Remember, you have every right to refuse any form of illegal and illegitimate order that is given to you, especially by people that have no authority to do so."

His address was part of a joint venture with MEC for transport, community safety and liaison Mxolisi Kaunda and acting provincial commissioner Gen Nhlanhla Mkhwanazi  to inspect law-enforcement personnel who will be deployed to voting stations for the elections.

Cele also said that KZN had been identified as a hostile province because of its many political killings.

Police have identified KZN and the North West provinces as the highest risks for violence during next week's general elections.
News
2 years ago
Interactive maps, rich data & more: visit our elections website now

In the build-up to and during the elections about 51,000 police offers would be deployed across the country, said Cele.

"All provinces have a little bit of risk, which is categorised as high, low and medium. This province makes the category of high. There are still confrontations here that result in death," he said, adding that high-violence areas would have six police officers on duty during voting.