WATCH | Can eating hot cross buns get you arrested at a breathalyser roadblock? 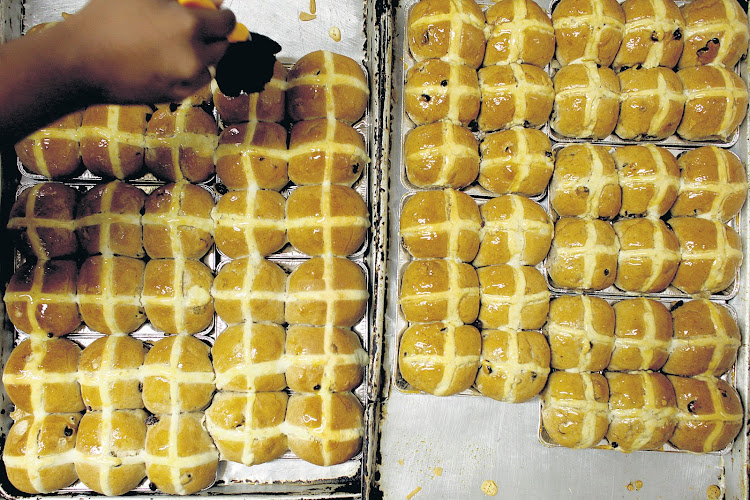 Indulging in hot cross buns just before getting behind the wheel could get you into trouble with law enforcement authorities.
Image: ALAN EASON

"You eat three of these buns, you’re done!"

That's the warning doing the rounds with a video clip on social media, showing how eating hot cross buns can affect the reading on a breathalyser machine used by law enforcement agencies.

In the video a man sitting in an office, wearing a law enforcement uniform, is asked to blow into a breathalyser machine. It displays a reading afterwards indicating that he is sober.

The officer is then encouraged to tuck into a hot cross bun by a colleague. Afterwards he blows into the breathalyser again and the machine produces a (false) positive reading of 0.21mg. The legal alcohol breath limit for driving in South Africa is less than 0.24mg per 1,000ml of breath.

A video has been doing the rounds on social media showing that eating a hot cross bun could affect the reading on a breathalyzer.

City of Cape Town MMC for safety and security JP Smith said on Wednesday, after viewing the footage, that such a reading would most likely only apply immediately after eating (certain types of) food.

"The readings are probably correct. If you check 10 minutes later, the reading will probably be back to zero.

"That is why it is so dangerous to only rely on a machine and not do a proper sobriety test first," Smith said.

Smith said the main evidence in a drunk driving case should rest on the arresting officer's observations. "The focus needs to be on impaired driving ability and not on an electronic reading.

"The training manuals for officers related to breathalysers teaches them this. If a false positive is obtained with such a device, then blood tests and other observations would be used as evidence as well," added Smith.

Road worker gets hit by a car on the N2 in graphic footage.
News
2 years ago

Food expert Nicola Brooks said that from a food recipe perspective, there was no point or function in putting actual alcohol in a bun.

"Alcohol is too expensive for the price of buns. Anyhow alcohol would likely disappear during the baking process due to the oven temperature," Brooks said.

"It was probably because the raisins in hot cross buns are soaked in brandy to give them that taste. It could also have been from the yeast they used," he said.

Dembovsy said he had been demonstrating this at road safety campaigns over the years, but he had used breath freshener. "If you want to see a handheld screen device go berserk, spray a bit of breath freshener in your mouth and blow into one of those."

"If [the person in the hot cross bun video] had rinsed his mouth out with water prior to blowing, it would have given no result. The alcohol clings to your cheeks, but it only stays there for about 20 minutes," Dembovsy said.

The upcoming Easter weekend has the country’s retailers on high alert amid fears of a wave of attacks by gangs of armed robbers.
News
2 years ago

The hot cross bun breathalyser conundrum was addressed in an article on Snopes.com in January, in response to a post on the Facebook page of a Australian trucking company.

In it, a trucker obtained a positive alcohol reading after eating a hot cross bun.

“Mouth alcohol” said Snopes, "is a well-known complication for breathalyzer tests and can be easily avoided by not eating, smoking, or chewing on anything for 15 to 20 minutes before blowing into the breathalyzer.

"This is why instruction manuals indicate that the tool should not be used on subjects for 15 to 20 minutes after they’ve eaten, and it is why law enforcement officers are required, in most jurisdictions, to repeat any tests yielding positive readings again after a 15- to 20-minute waiting period."

Transport minister Blade Nzimande launched the 2019 Easter road safety campaign in KwaZulu-Natal on Monday. Nzimande said the new evidential breathalyser alcohol test (ebat) device would be used during the safety campaign. The test takes two breath samples. If the lower shows 0.24mg of alcohol per 1‚000ml of breath (or more)‚ the driver will be charged.