Focus on drinking and driving as Easter safety campaign is launched 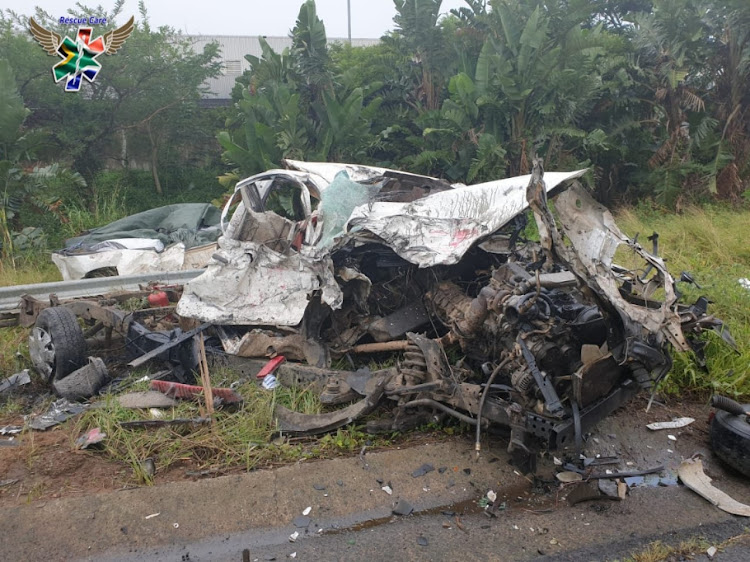 There was carnage on the N2 near the Joyner Road off-ramp in Durban on Tuesday when a truck and bakkie collided
Image: Rescue Care

The campaign is aimed at increasing driver awareness and reducing road accidents by creating an awareness of the impact of alcohol on road users' behaviour and its contribution to road carnage.

During the launch, Nzimande visited an alcohol evidential centre (AEC).

The state-of-the-art facility is a joint partnership between the national department of transport, its provincial counterpart and South African Breweries. It is equipped with all the necessary equipment required by law enforcement officials to accurately and efficiently determine the breath/alcohol level of a person suspected of driving under the influence.

Statistics released by the the department of transport at the end of the 2018 festive season showed that KZN had the most road deaths across the country with 267 crashes and 328 deaths.

Deaths on SA roads increased by 14% during the last Easter holidays when 510 people were killed compared with 449 the previous year. KZN recorded the most fatalities with 111 people killed on provincial roads.

The establishment of the alcohol evidence centre is part of SAB's road safety focus aimed at reducing harm caused by the misuse of alcohol.

SAB and AB InBev Africa’s senior director of corporate affairs, Zoleka Lisa, said the company was committed to making a real and positive impact on society and to do as much as possible to help change behaviour.

"Lower blood alcohol concentration limits and stricter enforcement have been proven around the world to reduce the number of accidents and fatalities linked to drinking and driving. South Africans must realise that if they are going to drink, they cannot drive," she said on Monday.

The alcohol evidence centres were first implemented across the country in 2009.

The Pietermaritzburg centre has breathalyser equipment and specially trained personnel to help traffic officers to more efficiently and effectively process drivers suspected of being over the legal alcohol limit. Such drivers are arrested immediately and detained.

The N3 freeway near Mooi River has been closed following another round of protests by truck drivers on Thursday.
News
3 years ago

Blade Nzimande is expected to brief the media on resolutions he intends implementing in an attempt to fix the problems plaguing SA's commuter rail ...
News
3 years ago
Next Article