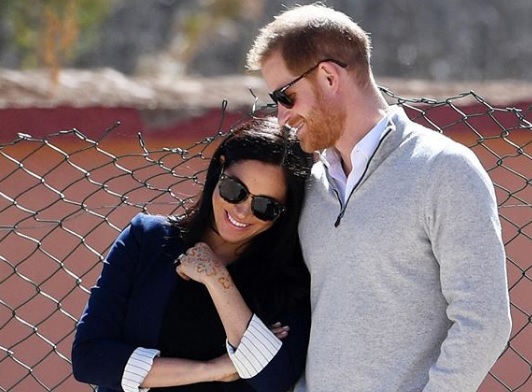 Babies and children around the world are to receive additional support as the Duke and Duchess of Sussex picked four charities for donations in lieu of baby gifts.
Image: Sussexroyal via Instagram

The public goodwill towards Prince Harry and Meghan Markle will cover the cost of 100,000 hot, nutritionally-fortified meals to schoolchildren in need in South Africa.

This is because the LunchBox Fund is one of four charities selected by the couple for donations ahead of the birth of their baby, expected any day now.

On their Instagram account this week, they posted: "Just one week ago, the Duke and Duchess of Sussex asked that you kindly consider supporting various organisations around the world in lieu of sending gifts for the upcoming arrival of their first-born. You have made a real difference."

The LunchBox Fund began in 2004, by feeding 100 children most in need at a high school in Soweto. Since then, it has grown to provide a daily meal to more than 26,000 orphaned and vulnerable children in schools and pre-schools in various parts of SA.

Oprah defends Meghan Markle: 'She has a warm, giving and loving heart'

Hating on Meghan? She wouldn't know cause she's doesn't read any of it.
Entertainment
2 years ago

The three other charities are @littlevillagehq, which received donations from all over the world (from UAE to Hong Kong and the US). Said the Sussexes: "They’ve increased their monthly donors, had a surge in volunteer applications, and re-energised their hard-working team of 200+ staff and volunteers."

The couple said @wellchild can now provide 300+ additional hours of specialist care by a Well Child nurse for a child with serious health needs, allowing families to stay together at home versus in hospital; and @Baby2Baby have received more than 5,000 products to disperse to children in need, including cribs, books, backpacks and diapers. It has also received monetary donations from around the globe - from Guadalajara to Italy, said the pair.

The Lunchbox Fund shared its appreciation on Facebook, saying it had received "an incredible" $25,000 (R352 354.94) from 12 countries around the world since the Sussexes had highlighted their work.