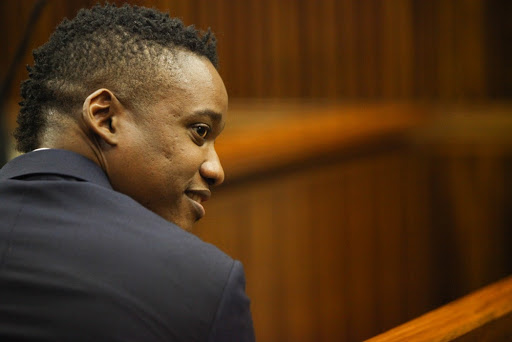 Duduzane Zuma could not have foreseen that his vehicle would hit a pool of water, lose control and crash into a taxi that claimed the life of Phumzile Dube.

This was an argument brought forward by Zuma's lawyer Mike Hellens in the Randburg magistrate's court yesterday, where the son of former president Jacob Zuma stands accused of culpable homicide and reckless and negligent driving. The crash happened on February 1 2014 on the M1 South in Johannesburg.

Hellens was addressing the court during an application to have Zuma discharged.

He argued that the state failed to prove any wrongdoing on Zuma's part and that a reasonable court could not convict Zuma on the said charges. He said the state could not prove negligence.

Hellens told the court that the incident happened on a rainy night, and that Zuma was driving at a normal speed. "It was raining. He did not see the pool of water. No one expects water on a national freeway," he argued.

Hellens blamed Zuma's loss of control on the defects of his Porsche. He said the car had a design fault that drivers were not aware of.

Former president Jacob Zuma has refused to rule out the possibility that the culpable homicide case against his son Duduzane is an attempt to get ...
News
3 years ago

"Porsche is prone to aquaplane. Porsche acknowledged the defect. They had to tell drivers that there was this defect and take measures to fix it."

However, prosecutor Yusuf Baba said Zuma had a case to answer. He argued that the onus was on the driver to act responsibly on the road. "Drivers must always be aware that they are in control of an instrument that can take life.

"Any car can aquaplane, the point is what actions you took prior. It does not remove the duty of the driver," said Baba.

Earlier in the day, accident investigator Johan van Loggerenberg said he concluded during the investigation that the crash may have been caused by human error. But he said he could not rule out the fact that aquaplane could have caused the crash.

One of the crash survivors, Charlotte Ndlangisa, relived the day she lost her friend Dube in the crash. She said she was sitting next to Dube in the taxi when it was hit by Zuma's Porsche.

"[After the crash] she was hanging on the window, her hair and eyes were full of blood. I realised that she was dead when she did not respond when I called her name," said Ndlangisa.

Ndlangisa said after the crash Zuma helped her into his luxury car to shield her from the rain.

Zuma Snr, who attended part of the proceedings, said it was difficult to tell if his son's prosecution was a way of getting back at him. Duduzane's twin sister, Duduzile, was also in court. The case was postponed to tomorrow for judgment.

Former president Jacob Zuma’s son, Duduzane Zuma, is in the dock on Tuesday in his culpable homicide trial relating to the death of Phumzile Dube, ...
News
3 years ago

Passenger paints out the horror of Duduzane Zuma's car crash

Both Duduzane Zuma's Porsche and the taxi which he collided with were driving between 90km and 100km per hour when the accident happened.
News
3 years ago
Next Article