Passenger paints out the horror of Duduzane Zuma's car crash 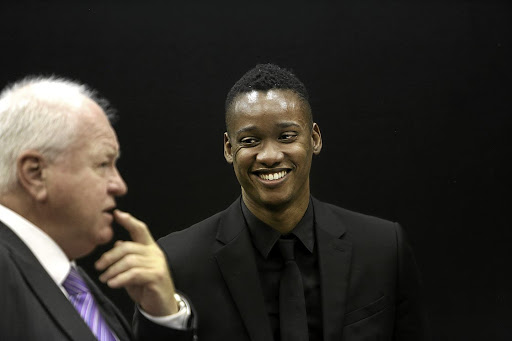 Duduzane Zuma and his lawyer Mike Hellen in the Randburg magistrate's court yesterday. Zuma was in the dock for his culpable homicide trial relating to the 2014 death of Phumzile Dube when his Porsche collided with a minibus taxi.
Image: ALON SKUY

Both Duduzane Zuma's Porsche and the taxi which he collided with were driving between 90km and 100km per hour when the accident happened.

This was the testimony presented to the Randburg magistrate's court yesterday where Zuma is facing a charge of culpable homicide from the fatal accident in 2014.

Taxi driver Vusi Dlamini took the stand to testify on what happened on the day one of the passengers, Phumzile Dube, died on the spot while three others were injured.

Dlamini said he was travelling from Fourways to the Johannesburg CBD when the incident occurred. He said he was on the left side of the road on the M1 south.

"When I got to the M1 South it was raining heavily, everything was fine and I was playing music in the taxi when my car was hit," he said.

Dlamini said despite the rain he could clearly see the road.

"I saw the cars' headlights. I do not remember much, I just saw my car being involved in a crash. There was a lot of water on the road," he said.

Dlamini said immediately after the incident, Zuma told him that he lost control of the car. He conceded that it was possible that the crash was unavoidable.

Zuma's lawyer Mike Hellen put it to Dlamini: "Mr Zuma was travelling at approximately 90km to 100km an hour as it was raining heavily. His car hit a puddle, swerved and he lost control of the car. Mr Zuma couldn't avoid the collision."

Dlamini said he couldn't differ with the statement.

A passenger in the taxi, Matron Mdakane, 73, said she saw Zuma's car coming their way and she warned the driver.

"I shouted to the driver, 'do you see that this car is going to injure us?' And he said 'yes, I can see'. It (the car) passed us spinning and then moved in reverse and then flipped our car," she said.

Mdakane, who boarded the taxi with her friend Jeanette Mashaba, said she alighted the taxi to look for her friend because she could not see her.

I shouted to the driver, 'do you see that this car is going to injure us?'

Mdakane said her friend was finally pulled out by paramedics who lifted the driver's seat to pull her out. She said Dube, who died on the spot, was also hanging from the window with her eyes facing the side.

"A girl called out and said, 'Phumzile [Dube] don't do that' I then approached the girl (Charlotte) and said 'lady, Phumzile is gone'. I asked her to close Phumzile's eyes, she said she was afraid to go next to her. I then said it's okay and closed Phumzile's eyes."

Did the taxi spin, or didn't it? This was one of the key questions on the first day of Duduzane Zuma's culpable homicide case on Tuesday.
News
2 years ago

He only saw the lights and the next moment his taxi spun two or three times before he lost consciousness.
News
2 years ago
Next Article