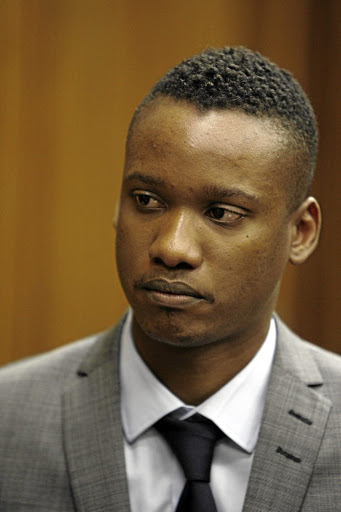 Duduzane Zuma is facing a charge of culpable homicide for the February 2014 crash on the M1 freeway, when his Porsche collided with a minibus taxi.Duduzane Zuma.
Image: Antonio Muchave

Did the taxi spin or didn't it?

This was one of the key questions on the first day of Duduzane Zuma's culpable homicide case on Tuesday, with one of the passengers in the taxi which was hit by a vehicle driven by the former president's son disputing evidence from the taxi driver.

Zuma is facing a charge of culpable homicide for the February 2014 crash on the M1 freeway, when his Porsche collided with a minibus taxi.

Although two people, Phumzile Dube and Jeanette Mashaba, died following the crash, the Randburg Magistrate's Court heard on Monday that Mashaba's death was a result of a pre-existing condition and was not linked to the accident.

Zuma, who has pleaded not guilty, now faces one charge in relation to Dube's death.

In court on Monday, one of the passengers disputed an integral part of testimony delivered earlier by the taxi driver.

Matron Mdakane, 73, said she did not recall the taxi spinning at any point during the collision. However, taxi driver Vusi Dlamini said the vehicle had spun several times.

"Did the taxi spin?" Mdakane was asked under cross-examination by Zuma's lawyer, Mike Hellens.

"No," replied a clearly agitated Mdakane.

"So if the driver says that it spun, he was incorrect?" Hellens continued.

"From where I was seated in the taxi, I did not see the taxi overturning," Mdakane replied.

"I did not say it overturned," Hellens pressed on.

"Are you talking about the car spinning? No, I did not see that happen," she replied.

Mdakane added that all she could recall was that it was raining heavily and she had been hurt because she had left home with her friend, Mashaba, and would now need to tell her children what had happened.

Mashaba, who had left Montecasino in Fourways with Mdakane, sustained injuries in the crash and died in hospital several weeks later.

According to Mdakane, she had found her friend hanging outside the driver's window with blood oozing from her nose. She had tried all she could to pull her friend out, but failed. Paramedics later extracted her from the vehicle.

Mdakane testified that she had been the one to close Dube's eyes while the woman was dying on the scene.

"I remember her clearly. When the black car hit, Phumzile [Dube] was in the third seat. She was seated by the window on the right-hand side.

"When I came looking for Jeanette [Mashaba], I saw Phumzile lying in the taxi, hanging out of the window. Her eyes were facing the window side. There was a girl there and, remember, we don’t know each other in the taxi. This girl was screaming, saying, 'Phumzile, do not do this'. I heard another gentleman refer to this girl as Charlotte," said Mdakane.

"I approached Charlotte and I said to her, 'Girl, Phumzile is no more.' I then asked Charlotte to close Phumzile's eyes. She refused and said she cannot go close to Phumzile.

"She said, 'Gogo, Phumzile has just been in an accident a week ago. So she is getting involved in another now.'

"I said to her, 'It’s okay, Charlotte, I will close her eyes.' I then closed Phumzile's eyes," Mdakane added.

This was the second time that Mdakane has had to relay testimony on the incident. She gave evidence at the inquest into the accident in 2014, where she laid the blame for the accident at Zuma's feet.

"I do blame him because he was the one who hit us with his car," she said at the time.

Mdakane was consistent during her testimony on Monday, claiming that Zuma had been speeding. However, she admitted that she did not drive and did not know how to measure speed.

She maintained that the taxi she was in was not speeding. Instead, she had told the driver to watch out for Zuma's vehicle, which she said was making its way across the road.

"I shouted out to the driver and asked whether he could see this motor vehicle, which seemed like it was going to injure us," Mdakane told the court.

"The driver responded and said he could see it. The motor vehicle then passed. As soon as it had passed, it then turned [spun] around and it went backwards. That is when it collided with the taxi," she said.

During the 2014 inquest, Mdakane had become agitated with the interpreter, leading to the court bringing in a new one to complete her testimony.

On Tuesday, she again showed irritation, but this time it was with Zuma's lawyer.

Hellens pressed Mdakane, asking what had led her to look around from where she was sitting and notice Zuma’s black car coming from the back. It was also travelling from the other side of the road.

"Taxis are not like Intercape buses. They don’t have curtains, so you can see the road ahead of you," she replied.

At one point, she told Hellens that she did not understand where his line of questioning was headed and refused to answer his questions.

"What reason did you have to look to the right?" he asked her.

"Because of how the car was braking," she finally replied after several attempts to get an answer from her.

"This is the first time we are hearing of braking ... It was never in the police statement either," Hellens said.

"Yes, that is so. I never mentioned it in that way, but I am answering it because you are asking about it now," she replied.

As Mdakane showed more irritation, magistrate Tebogo Thupaatlase explained that she had to answer the questions.

He requested that she compose herself and explained that this was the manner in which court proceedings were conducted.

Mdakane's testimony was concluded on Tuesday.

On Wednesday, the state is expected to call two more witnesses before wrapping up its case.