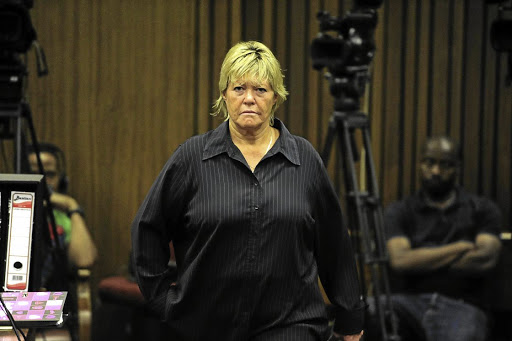 DA MP Glynnis Breytenbach has been accused of lying before two magistrates and an acting judge in a bid to have former Scorpions deputy-head, Geoffrey Ledwaba, prosecuted on corruption charges.

This emerged in the Johannesburg magistrate's court yesterday when advocate Willem van Zyl was cross-examined during a fraud case against Ledwaba.

Ledwaba, a lawyer who is representing himself in this case, stands accused of fraud, obstruction of justice and corruption after he allegedly deposited R10,000 into Van Zyl's bank account in a bid to weaken his (Ledwaba) theft and fraud case in 2012.

At the time, Van Zyl had taken over the prosecution after Breytenbach was suspended by the National Prosecution Authority (NPA). Ledwaba was acquitted from the 2012 trail after a lengthy and bruising court battle.

Leading Van Zyl through evidence, Ledwaba put it to Van Zyl that Breytenbach, who was a prosecutor in his 2006 bail application, lied to chief magistrate Desmond Nair in the Pretoria magistrate's court after arguing that Ledwaba's bail amount should be set at a mammoth R250,000 because the NPA was also investigating a case of corruption which carried a minimum sentence of 15 years.

Ledwaba also put it to Van Zyl that Breytenbach did so despite knowing that a case of corruption was non-existent and that she continued with her lie during his appeal to have his bail amount reduced before magistrate Dawie Jacobs, and to judge Vivian Tlhapi in September 2008 and May 2009, respectively.

Van Zyl, a senior advocate in the NPA, hesitantly conceded to this but said he could not remember the facts of the case as they were rooted in the year 2006. "Did you report her to the senior management at NPA?" Ledwaba asked. "No, I did not," Van Zyl responded.

"You know you were meant to do that if you're distancing yourself from her actions and you might be seen as an accomplice," Ledwaba said. "I might be, depending on the situation at the time. 2006 was a long time ago and I cannot recall why not," Van Zyl said.

Breytenbach and Van Zyl were part of a three-pronged team that failed to prosecute Ledwaba in the 2006 matter.

Ledwaba alleged that Breytenbach was being used by former national director of public prosecutions, Leonard McCarthy.

DA MP Glynnis Breytenbach has withdrawn her candidacy for the position of National Director of Public Prosecutions.
News
2 years ago

Ledwaba further argued that Van Zyl, the complainant in the current matter and a senior member of the NPA, was compromised as he played an active role in the investigations.

The trial was postponed until today for further testimony.

When approached for comment on this matter yesterday, Breytenbach said: "Just landed. Will read and revert tomorrow (today)."