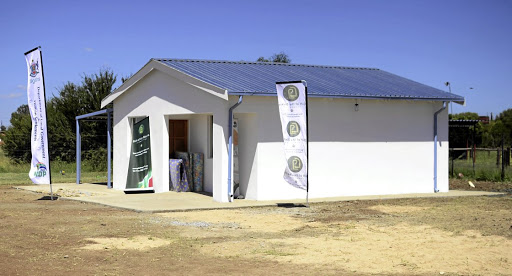 The family of murdered Coligny teenager Matlhomola Mosweu yesterday moved into their new fully furnished four-roomed house in Coligny - a far cry from their shack in Scotland informal settlement.

The family was handed the house as part of North West government's Human Rights Day celebrations.

Mosweu was killed by Phillip Schutte and Pieter Doorewaard, who have been sentenced to 23 years and 18 years' imprisonment respectively.

The pair assaulted Mosweu before throwing him off a moving bakkie after they accused him of stealing sunflower heads in April 2017.

His mother, Agnes Mosweu, said yesterday her new home was built not far from where her son took his last breath. This, she said, will serve as a constant reminder to the family of what had happened to the teenager.

"I like the house, its beautiful but government took us to the very same white people who killed my son; all my neighbours here are whites," said Mosweu. 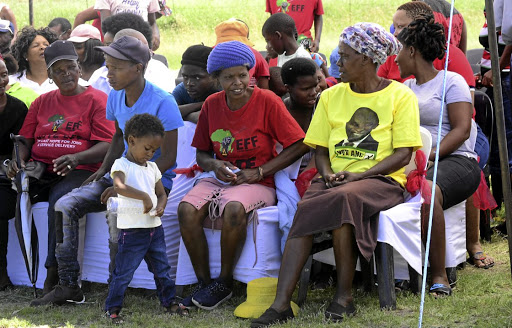 Agnes Mosweu, second from right, the mother to the late Matlhomola Mosweu, during a Human Rights Day event that ended with the handing over of their newly built house in Coligny yesterday.
Image: Tiro Ramatlhatse

"I can see that farm... I can see where my son died. So every morning when I wake up, I will be faced with the reality of my son's death."

Mosweu found herself at the centre of a commotion when some ANC supporters urged her to take off the EFF T-shirt but she refused.

Premier Job Mokgoro and aid organisation Gift of the Givers handed over the keys to the house to the family.

The family wanted the house to be build closer to where they lived but were told during a sod-turning ceremony that their area did not have basic services like water and sanitation.

The family now has access to electricity, tarred roads and running water.

Mosweu's father, Saki Dingake, however, said he was worried that the neighbours will still accuse his children of stealing from them.

"The government took my kids back to the whites knowing that they are our enemies. To the government it's okay and nice because they have done what they wanted, to me it's painful," he said.

Mokgoro likened Mosweu's death to that of the victims of the Sharpeville and Langa massacres.

"We see his death in the context of fighting a continuous battle for freedom and human rights," he said.

He said the government also saw it appropriate to give Mosweu's family a home since the country's constitution makes provision for housing as part of human rights.

His death caused racial tension in Coligny. Mokgoro drew comparisons between Mosweu's killing to that of Struggle icon Solomon Mahlangu.

"Mahlangu said his blood will water the tree that will bear fruits of freedom, in many ways Mosweu's blood, we see it as continually watering and oiling the struggle for freedom," Mokgoro said.

The sentencing of two Coligny farmworkers for killing teenager Matlhomola Mosweu two years ago was met with mixed emotions yesterday but muted in ...
Opinion
2 years ago

Convicted Coligny murderers Phillip Schutte and Pieter Doorewaard were sentenced to 23 and 18 years respectively.
News
2 years ago
Next Article