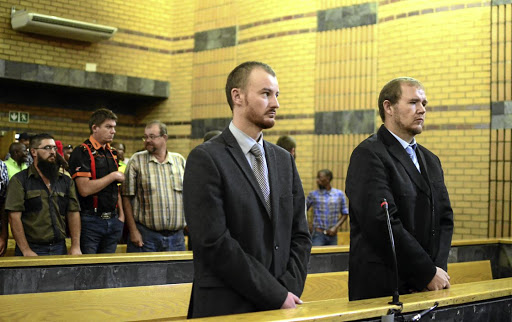 Doorewaard and Schutte killed Mosweu on April 20 2017 after accusing him of stealing sunflower heads.

The North West high court judge Ronald Hendricks on Wednesday morning sentenced Doorewaard to 15 years in prison for murder, three for kidnapping, two for intimidation, one for theft and two years for pointing a firearm.

Mosweu’s mother Agnes Mosweu rejoiced after the sentencing. “I am happy, I will finally be able to sleep at night knowing that the killers of my son are locked behind bars,” she said.

Judge Hendricks said the actions of the two men found guilty of killing teenager Matlhomola Mosweu were a disgrace and appalling.

He said Mosweu was brutally killed and that it was not certain on how many sunflower heads was stolen or what was its value there of.

He said on the version of the sole witness of the case, Bonakele Pakisi , a gunshot was heard at the sunflower field, accused number two Schutte emerged with a bakkie while Doorewaard came with a quart bike.

“You pick up the deceased from the van and throw him on the ground. It was not necessary, if  you wanted action to be taken against him, you could have used other methods for him to be apprehended,” Hendricks said.

Hendricks said as if that was not enough , the pair noticed Pakisi and also  forced him to get into the bakkie.

“You kidnapped him, assaulted him and forced him to drink alcohol, and you also pointed him with a firearm and his cellphone was also taken away from him,” he said.

He said the incident divided the small town of Coligny. “Community of Coligny was terrorised by this incident,”

Hendricks said the offence was not planned or premeditated. “it happened at a spare of a moment, there was no direct intention to kill the deceased

The pair was found guilty last year October for killing Mosweu of Scotland informal settlement in April 20, 2017 after accusing him of stealing sunflower heads.

Advocate Smit said since he was locked behind bars, Schutte has lost over 40kg of his body weight.
News
2 years ago

Zwiegelaar said that his plan was to marry his 27-year-old girlfriend as soon as he gets released.
News
2 years ago
Next Article