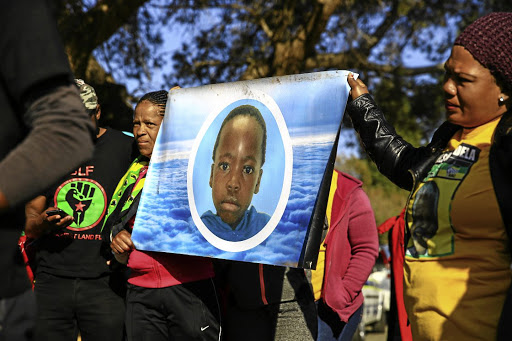 Coligny teenager Matlhomola Mosweu's murderer Pieter Doorewaard says he plans to marry his girlfriend as soon as he gets out of jail.
Image: Simphiwe Nkwali

One of the two men found guilty of killing a Coligny teenager told the North West high court through his legal representative on Thursday that as soon as he gets released from custody, he will be marrying his girlfriend.

Pieter Doorewaard and Phillip Schutte were found guilty in October last year of killing 16-year-old Matlhomola Mosweu after accusing him of stealing sunflower heads in a farm where they worked.

In her closing submissions, defence attorney advocate Cecile Zwiegelaar said Doorewaard was a first-time offender and that he did not have previous convictions.

She said that his plan was to marry his 27-year-old girlfriend as soon as he gets released.

Coligny teen's mom heard of his death from colleagues

The mother of the murdered Coligny teenager Mosweu said she heard her colleagues talking about a boy who had been found killed, and later realised ...
News
3 years ago

“Accused number one is involved in a stable relationship with his girlfriend and they are planning to marry each other after his release,” Zwiegelaar said.

She said Doorewaard was struggling to come to terms with the death of Matlhomola. Zwiegelaar was submitting his closing arguments ahead of sentencing.

Matlhomola was killed in April 2017 in Rietvlei farm, North West. His death caused divisions and tension amongst the black and white community in the small farming town.