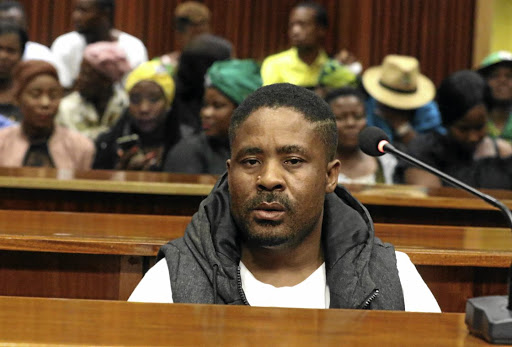 Cuthbert Manamela reflects on his life sentence after it was handed to him in the Polokwane high court yesterday for the murder of his former girlfriend two years ago.
Image: ANTONIO MUCHAVE

The mother of a Limpopo woman, who was stabbed to death 20 times by her ex-boyfriend two years ago, wants to see her killer rot in jail.

This after the Polokwane high court found Manamela guilty of the murder and theft of Lamola's cellphone and house keys in Seshego Zone 4 two years ago.

Speaking after the judgment, Lamola's mother, Johanna, welcomed the sentence imposed on Manamela.

"Life sentence is good for him. I will never see my daughter again after he brutally killed her. He must never come back to the community, he should rot in jail," she said.

Johanna said Manamela refused to confess that he killed her daughter.

"Even if he confesses now and apologises, I will not accept his apology. I will hate him until I die."

Judge Ephraim Makgoba, who flayed police for failing to take some evidence for laboratory testing, said the postmortem results had revealed that Lamola died from multiple stab wounds.

Makgoba described Manamela as a poor and dishonest witness and commended state witnesses for their transparency and honesty.

"I have been observing his body language throughout the trial and does not show any remorse," he said.

Defence lawyer Sam Mamabolo mitigated that what Manamela did was a "crime of passion". But Makgoba said the incident was a pure premeditated murder.

The court also found that Manamela had threatened to commit suicide after Lamola broke up with him.

The state submitted a suicide note from Manamela which was found a day after his arrest in his rented room in Seshego Zone 4.

In the suicide note, which was read out in court, Manamela accuses Lamola of cheating on him with ANC Milo Malatji branch chairperson in Seshego Boy Mamabolo.

In the note, Manamela wishes Mamabolo and Lamola a happy relationship.

Mamabolo yesterday told Sowetan Manamela's allegations were misinformed, because Lamola had been his comrade.

"I knew Lebogang for five years as a friend and comrade. I once confronted him over these allegations and understood each other," said Mamabolo