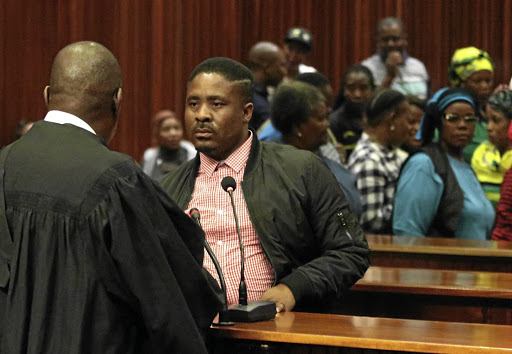 Manamela appearing at Limpopo High Court, charged with the murder of his girlfriend Lebogang Lamola in 2017, in Seshego /Antonio Muchave

A Limpopo judge has slammed the police for missing evidence in the murder case of Lebogang Lamola who was allegedly murdered by her ex-boyfriend two years ago.

Judge Ephraim Makgoba of the Polokwane High Court was left dismayed to hear that evidence which included a bloodstained T-shirt that was found at the suspect Cuthbert Manamela's girlfriend house in Rustenburg, in the North West, was not booked and sent to police forensic lab.

"How can the police from Seshego book a state car and travel to North West, recover evidence and not place it in the police storage or send to the lab?

"You went to Rustenburg and found a T-shirt belonging to Manamela with bloodstains on it. Thereafter, you went ahead to retrieve the deceased's cellphone and house keys but now that exhibit is not here in court as evidence. What happened to the evidence? These police think this is a joke," said Makgoba.

The visibly angry judge said no DNA test was done to establish whose blood it was on the accused's T-shirt.

A federal appeals court on Thursday affirmed a decision to overturn the murder conviction of Brendan Dassey, a Wisconsin man serving a life sentence ...
News
4 years ago

OPINION Why the state media gag on Life Esidimeni is wrong

Government lawyers in the Life Esidimeni hearings have managed to stop the media speaking to families and lawyers‚ even preventing fact checking of ...
Opinion
4 years ago

This was after prosecutor Erick Mabapa told the court that evidence was missing and they have been waiting for the investigating officer to shed some light on the matter.

Sgt Erick Makunyane, of police tracking unit, told the court that after they found evidence they brought it to Seshego police station.

"Our job was to recover the evidence and bring it to the SAPS 13 [police storage for recovered items]. The investigating officer will be able to know what happened to the evidence," he said.

Makunyane said they got a tip-off that Manamela had a girlfriend and three children who reside in Rustenburg.

"When we got there we found the woman who gave us the T-shirt and said it belonged to Manamela. We went further to retrieve Lamola's cellphone and keys which were thrown in the bushes after Manamela pointed the scene. The phone was damaged beyond repair," he said.

Lamola's phone and house keys were recovered in Rustenburg two days after her lifeless body was found lying in her bedroom in Seshego Zone 4.

Lamola, 23, was allegedly killed by Manamela who was her ex-boyfriend in 2017.

Manamela faces charges of murder and robbery. Another witness Sgt Masilo Makola said: "On the same day Manamela handed himself over to police, he told them of the whereabouts of Lamola's cellphone and keys."

Lamola's friend, Kgaugelo Selomane, who broke down during the proceedings, told the court Lamola had informed her that should anything bad happen to her, police should take Manamela into custody as their prime suspect.

"She came to my house on October 20 and asked to use my phone to send a text message to Manamela. Manamela called back on my phone and I heard Lamola saying he should bring back her cellphone and keys," said Selomane.