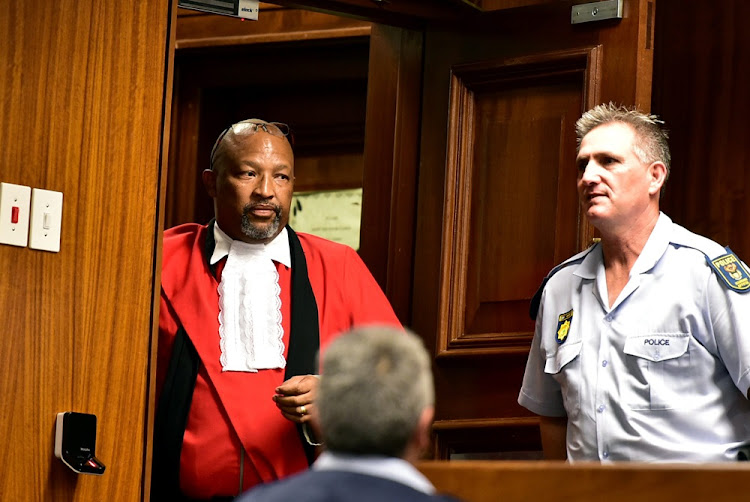 On Friday, Makaula said, in the interest of justice, he would do so even though he had no financial interest or a role in the affairs of his wife’s company, which runs a guesthouse where state witnesses had been accommodated.

Makaula’s wife is the sole director of the close corporation which runs the guesthouse.

“I must place it on record that I am not involved [in my wife’s business], either as a director or shareholder,” he said.

Makaula explicitly said there was no application brought by the defence to recuse himself based on the fact that his wife owns the guesthouse, but that it was, in his view, the appropriate thing to do.

“I make this decision out of my own free will because I can foresee there could be perceived bias in the future,” he said.

According to Makaula, he has declared his wife’s business interests to his employer each year.

Eastern Cape judge president Selby Mbenenge addressed the court on a way forward. Three specific issues were dealt with - when the trial would start again, media involvement and coverage of the matter, and whether or not either the defence or state would bring any applications.

Peter Daubermann, defence attorney for Omotoso and his co-accused, Zukiswa Sitho and Lusanda Sulani, indicated to the court that he would bring an application regarding the charge sheet after state prosecutor Nceba Ntelwa said he would use the same charge sheet as before.

Daubermann did not specify what application he would bring.

After a brief adjournment following a power outage due to load-shedding, Daubermann proposed to the court that all 21 female complainants in the matter be accompanied by a trained psychologist when they testify at the state's cost.

The trial will re-commence on July 30 and run for its full duration, which could be eight to nine weeks, according to Ntelwa.

Mbenenge said an application should be made by the media in due course if it requested the trial be broadcast live.

Daubermann indicated that he would oppose the application, saying criminal trial witnesses were not permitted to sit in court to hear other witness testimony and allowing live broadcasting would give witnesses the opportunity to hear other testimonies.

“I am not trying to muzzle the media at all,” Daubermann said.

Mbenenge further said if any party wished to bring an application of any sort they should do so before June 28.

“We do not agree with the finding of the SCA and are proceeding with an application to the Constitutional Court for leave to appeal [against the ...
News
3 years ago
Next Article