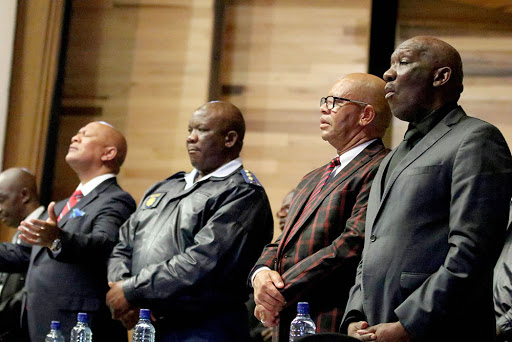 Police have denied rumours that one of the suspects arrested for the brutal murder of Thorisho Themane, the son of a policeman, has been released from custody.
Image: ANTONIO MUCHAVE/Sowetan

Limpopo police have scotched rumours circulating on social media that the son of a retired policeman who is among 10 suspects arrested for the brutal murder of Thorisho Themane - and who allegedly boasted in a video clip about the killing - has been released from custody.

"I want to put it categorically clear that all the arrested suspects will duly be processed through the ongoing court processes and that no one will receive any preferential treatment‚" Limpopo pronvicial police commissioner Lieutenant-General Nneke Ledwaba said on Saturday.

The teen had allegedly boasted on social media that he was "untouchable" because his father was a senior police officer.

Meanwhile‚ Ledwaba on Saturday on Saturday praised police for the arrest of a 10th suspect in the brutal slaying. Limpopo police said that a 13-year-old boy had been arrested after being brought to the Polokwane police station by his parents on Friday.

Limpopo police have arrested a 10th suspect for the murder of Thorisho Themane.
News
3 years ago

He will appear in the Polokwane Children’s Court on Monday on a charge of murder.

Three adults charged in the case will also appear in court on Monday for a formal bail application‚ while six teenagers arrested in connection with the slaying will appear again in court on Thursday.

The bloody body of 27-year-old Themane was discovered in a street in Flora Park‚ Polokwane‚ on February 25 after he was allegedly assaulted and dragged through the streets by a gang of youths.

A video of him being carried by a group of people was widely circulated  on social media.