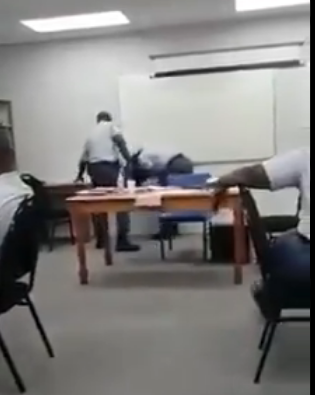 Police have said the viral 'assault' video is from a domestic violence class
Image: Twitter/@kunjaloD

Police have confirmed that a video showing a policewoman being assaulted by a policeman was a re-enactment of a real-life domestic violence situation.

In the video that has since gone viral, the policewoman is seen being assaulted by a male cop while a group of policemen watch. She is then seen leaving the "crime scene" room immediately after the assault.

KwaZulu-Natal provincial  police spokesperson Brigadier Jay Naicker said the police have launched an investigation to find out who was responsible for filming and posting the video on social media.

“It is suspected that a police official, who might have attended this training at our Durban training centre last year, could be responsible for recording this scene and posting the clip on-line.

We are indeed perturbed and believe that this individual was extremely malicious because of the timing of the release of the video,” he said.

Really...this male cop assaults a female cop, at a police station, and other cops are just fine with it🤷🏿‍♂️ pic.twitter.com/dzNpTOmoQU