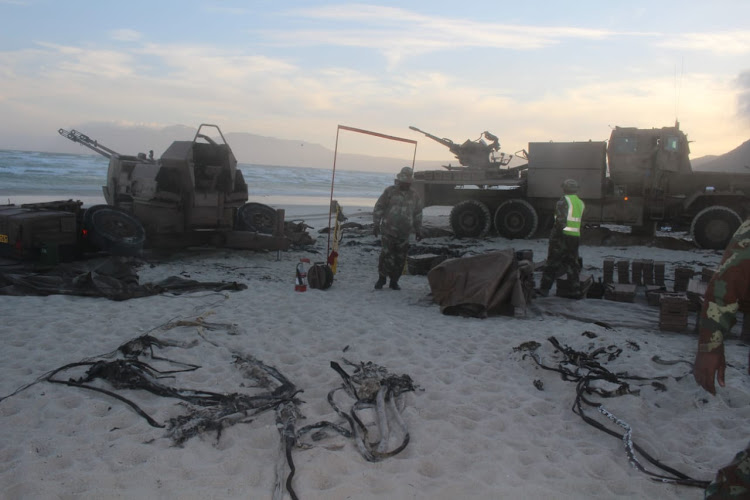 Heavy artillery on Muizenberg beach‚ loudly firing on targets at sea‚ has prompted consternation among some residents - and member of parliament Narend Singh.

An estimated 8‚500 troops from all branches of the military are in the Western Cape for a week-long commemoration of Armed Forces Day.

A range of events are planned‚ at various places‚ but it is the South African Army deployment of heavy weaponry on the beach that is raising eyebrows.

A night shoot exercise was planned for Tuesday night‚ preceded by a rehearsal on Monday.

On social media it was apparent that noise from the event startled residents‚ with one person sharing this from about 6km away: "My windows are shaking!"

A full-scale military "invasion" of Cape Town will go ahead as planned next month despite stringent defence force budget cuts‚ the South African ...
News
2 years ago

Another resident shared: "For five hours‚ from 4-9pm [on Monday]‚ the people in the southern peninsula of Cape Town have been subjected to a barrage of extremely loud noise as the SANDF fired live ammunition and flares into the sea.

"The SANDF has set up on Sunrise Beach‚ a short walk from the main beach of Muizenberg‚ in the middle of a residential area. [Tuesday] will be even worse when they add in the air displays. They have disrupted the wildlife and possibly permanently damaged marine life in the area. The many voices of protest by residents were completely ignored."

Singh‚ from the Inkatha Freedom Party‚ said on Tuesday the military should be deployed to protect the borders‚ "not kill our wildlife!"

The IFP has submitted an objection to the military shoot on the False Bay coast to the minister of defence and military veterans‚ Nosiviwe Mapisa-Nqakula.

Singh also called for "the immediate cessation of this military exercise‚ and for the minister of environment to ascertain whether an environmental impact assessment was completed and approved for such wanton environmental destruction."

In addition‚ the party wanted "to ascertain what the total cost of the vanity exercise‚ named Armed Forces Day‚ was".

"It is shameful that our military might was abused to the detriment of our environment‚ coastal waters and domestic pets. Many calls by civil society organisations have fallen on deaf ears which includes the City of Cape Town‚ as the SANDF continues to parade itself around the city‚" said Singh.

SA National Defence Force says it has taken a decision to find ways of doing things internally.
News
2 years ago

"The SANDF would be better placed along our porous borders to combat the illicit flow of trade‚ goods and people. The country is bleeding money because of poor border management to the benefit of organised crime syndicates."

The SANDF said earlier that it would descend to the City of Cape Town to "honour the bravery of sons and daughters of our country who lost their lives in the fateful 1917 sinking of the SS Mendi.

"The people’s defence force will also showcase its military might and state-of-the-art hardware and technology in its quest to defend the territorial integrity and borders of our republic‚" the military said in a statement.

The displays are open to the public‚ free of charge.

While many were critical of the event‚ others took to social media in support of it.