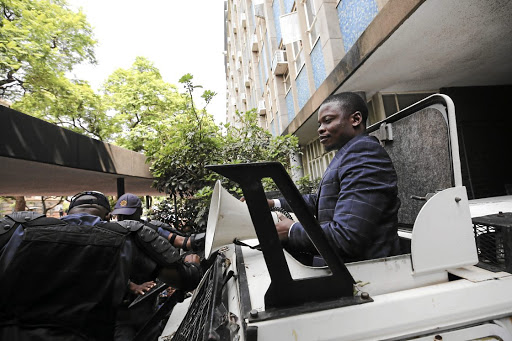 Shepherd Bushiri addresses his supporters after being released on R100,000 bail yesterday. Questions have since been raised as to why he was transported in a police armoured vehicle.
Image: Alaister Russell

Police have launched a probe into the preferential treatment given to controversial prophet Shepherd Bushiri after his court appearance yesterday.

Bushiri, 35, was driven in a police nyala to address his legion of supporters outside the Pretoria Specialised Commercial Crimes Court yesterday after he and his wife Mary, 37, were granted R100,000 bail each.

Bushiri could barely be heard as his followers screamed and shoved one another in excitement.

He waved, saying: "Thank you. God loves you. I love you."

The leader of the Enlightened Christian Gathering Church was charged with fraud, money laundering and contravention of the Prevention of Organised Crime Act.

This emanated from his purchase of a private jet in 2015 for which he allegedly paid $1,147,200 (R15,3m) in cash - in contravention of the exchange regulations.

"I am not aware of it. It is something that we will have to check with the commanders ... why it was done. I think at the same time maybe they wanted to quell tensions because we knew that people were angry and took the matter personally.

"Sometimes you can do that. It is conditional, based on the situation on the ground but we need facts to establish why the decision was taken."

Bushiri's second appearance in court since his arrest on Friday drew a large crowd, including ANC politicians who pledged their support for him.

One of them was Tshwane ANC regional chairperson Kgosi Maepa, who claimed he had been sent by the party's national executive committee (NEC) to show support for him.

This claim was, however, dismissed by ANC acting spokesperson Zizi Kodwa, who said Maepa had no power to speak on behalf of the NEC.

But Maepa insisted he had been mandated by NEC members Mathole Motshekga, as head of religious affairs, and Senzo Mchunu, as head of ANC mobilisation.

"Mr Motshekga had a meeting with Senzo Mchunu and leaders of the church the previous day (Tuesday). The ANC sent me there. I didn't just wake up and go there," he said.

Mchunu confirmed having asked Maepa to go to court on behalf of the party.

On Monday, Bushiri's supporters threatened to boycott the upcoming elections if the churchman was not released from custody.

The matter was postponed to May 10.